Thomas Pieters detailed how he plans to celebrate after winning the Abu Dhabi HSBC Championship at Yas Links. 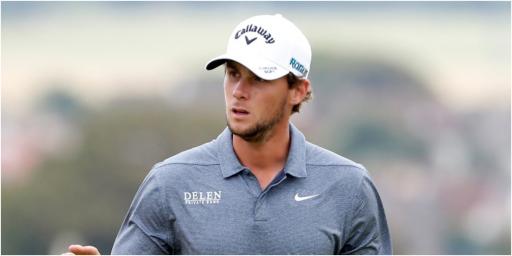 You could be forgiven for thinking Thomas Pieters might let loose a little bit after the biggest win of his career.

Afterall, this has been the making of a life's work for the 29-year-old Belgian, who held his nerve to claim his first Rolex Series title.

Finishing on 10-under par, one stroke clear of Rafa Cabrera Bello and Shubhankar Sharma, Pieters was supreme all weekend.

Playing golf, he confessed, is most fun for him when he can control his ball flight. That's what he did, and then some, at Yas Links.

It's such a thrilling start for the year for Pieters, who later admitted he felt like he had turned a corner after conceding he disappeared for two years.

We've known his talent for some time but he hasn't quite delivered on it yet. Until now. Can he put the foot on the peddle now?

He's moved back inside the world's top 50. Much of that improvement, he has admitted, is down to his work with Rory's old swing coach Pete Cowen.

Pieters was described by reporters inside the ropes as striping it on the range and really, really grinding away at his game.

Speaking after he picked up more than €1.3million, Pieters was asked how he would celebrate. He wanted to fly home in a private jet, but that wasn't possible.

He said: "I'd fly home if I had a private jet. But negative. What am I going to do? I'm going to pick up my shoes at the hotel, because I forgot them.

"Then we're going to drive to a mall where we dropped our laundry on Friday. Then we go to Dubai. Book a hotel as I haven't booked a hotel yet.

Viktor Hovland is continuing to show the world he can play just about anywhere.

Though he'll surely look back on this week as the one that really slipped away.

Hovland made a triple bogey during his final round at the fifth hole and also saw his hopes fade with another double bogey at the par-14 15th.

Of course, the Norwegian tried to salvage his round by making eagle at the seventh and at the 11th, but it just wasn't enough.

Now, though, the young superstar has moved up to inside the top five of the Official World Golf Rankings.

Next page: How much did Hudson Swafford win at The American Express?