The Northern Irishman has confirmed he will return to his longtime instructor Michael Bannon. 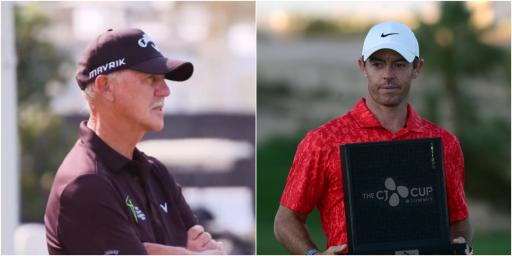 Rory McIlroy has confirmed he is splitting with renowned swing coach Pete Cowen after only eight months.

The Northern Irishman, 32, reportedly told Golfweek that he will return to work full-time with his junior mentor Michael Bannon.

It has been suggest that McIlroy started working with Bannon again shortly after he won the CJ Cup in Las Vegas last month.

"Michael and I are back working together," McIlroy, a 20-time winner on the PGA Tour and a four-time major champion told the publication.

"I've always had a relationship with Pete and I'll ask for his input if I need it. But now it's Michael and me."

McIlroy has known Bannon since the age of eight.

Bannon spotted his natural talent and worked with him for all of his major victories.

It was only through the global pandemic that McIlroy turned to Cowen for advice as Bannon was not able to travel to the United States.

McIlroy has not won a major title since 2014 and has struggled to find a formula that consistently works for him.

MORE: THE DIFFERENCE BETWEEN THE MASTERS AND PGA TOUR

A relentless pursuit for speed hindered his swing as he hoped to emulate Bryson DeChambeau's numbers.

Last season he missed the cut at the Players Championship and at the Masters where he made just four birdies in 36 holes at Augusta National.

McIlroy did pick up a much-needed win at Quail Hollow in May to end his 18-month drought.

But he was off the boil at the Ryder Cup and even broke down in tears on the side of the 16th green after beating Xander Schauffele in the Sunday Singles.

He admitted he could have done more for his team.

McIlroy now appears to be on an upward trajectory, though, as his win at the CJ Cup in Las Vegas propelled him back inside the world's top 10.

MORE: BRYSON ON HIS NEW DRIVER? "IT'S DISGUSTING"