The DP World Tour decided to call an end to the Joburg Open on Saturday due to the continuing inclement weather in the area. 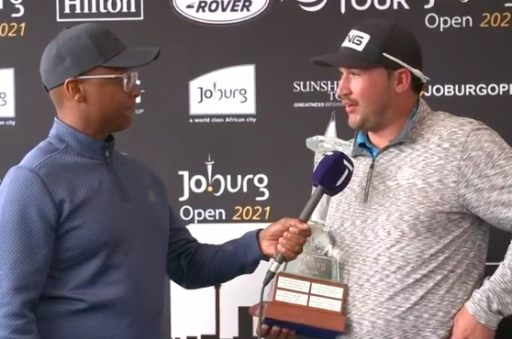 Thriston Lawrence has been declared winner of the Joburg Open after 36 holes after the tournament was called to a halt due to constant inclement weather.

At just after 10 am (British time) on Saturday, play was suspended due to heavy rain and lightning in the area. Play was also suspended during the first round for this reason.

But the weather did not subside in Johannesburg, so the Sunshine Tour, DP World Tour and City of Johannesburg took the joint decision to end the tournament.

The Joburg Open had already been reduced to 54 holes to allow non-European players an extra day to travel home from South Africa, after it was placed on the travel red list by various governments.

Lawrence held a four-shot lead heading into what was going to be the third and final round. He has now won the first DP World Tour event of his career and the first-ever event of the tour's existence.

"I'm shaking, to be honest, it's so surreal. I don't think anybody thought it would turn out like this and finish on a Saturday afternoon," said Lawrence, holding his trophy.

"I'm just thankful, it's a life-changing moment for me. I can't thank the city of Joburg enough for this opportunity, the DP World Tour obviously and the Sunshine Tour.

"It's a life-changing moment, a lot of things are going to change in my schedule and everyone back home, family and sponsors, I can't thank them enough."

The World No. 503 shot a pair of 65's at Randpark Golf Club to finish four shots clear of fellow South African Zander Lombard. Ashley Chesters finished in a tie for fourth place with Shaun Norris.

NEXT PAGE: GOLF COURSES SHUT ACROSS UNITED KINGDOM DUE TO STORM ARWEN AND DEEP SNOW