He's got the fire and passion just like his father, who has been a talisman Team Europe in the Ryder Cup... 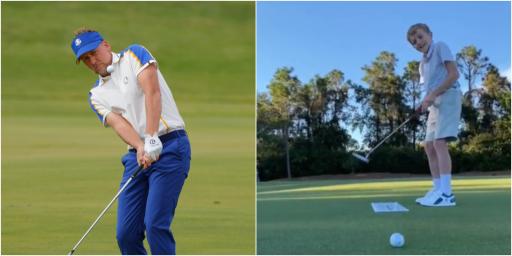 It is fair to say Ian Poulter's children are taking after their old man.

Earlier this year Poulter, 45, shared the news that his son Luke Poulter has signed for a storied college golf program.

He's signed up to be a Florida Gator and looks like he will definitely make the step into professional golf at some point. He's got game.

And it appears that Poulter's youngest son Joshua is not too far behind, judging from the clip Poulter shared on his social media pages.

It shows Josh with the putting mat out attempting to drain nine consecutive putts that break from left to right.

Look at that nice putting stroke, just like his father.

Putting practise can drive you absolutely mad and it's not uncommon to see people out there for hours until they accomplish a target.

Little Josh is no different. He was determined to drain nine in a row. And it took him nearly 60 minutes.

When you work for an hour trying to get 9 in a row pic.twitter.com/ZHPSxQ1eGE

Not many bigger days in your life than signing for @GatorsGolf

Proud to see Luke work so hard & be offered a position to join such a great team. @realjcdeacon I know you’ll guide him along the next part of his journey. @AndrewLoseyGolf you’ve done an amazing job! Go ‘s pic.twitter.com/7JVWypY2qM

Josh has even got the classic Poulter celebration down pat, too. Just look at the elation and glee from the young golfer.

Fire and passion in abundance. Remind you of anyone? Perhaps we have a future Ryder Cupper on our hands.

How big are your balls  pic.twitter.com/EAGmuWWsyG