Rory McIlroy and Matt Fitzpatrick look set to fight out the DP World Tour Rankings; here's what each of them needs in order to win the coveted title in Dubai on Sunday.... 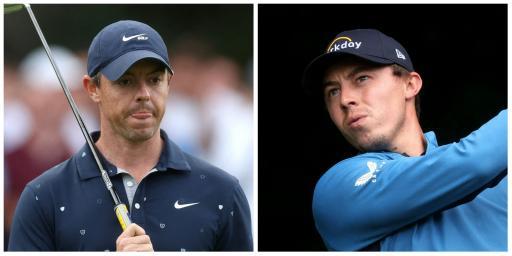 Not in the slightest.

McIlroy motored midway through his round on Saturday, nearly holing out for eagle twice in a row at 8 and 9.

That led to kick-in birdies, and he would follow it up with a hat-trick on 10 thanks to draining a 15-footer.

Three more birdies on the final five holes saw McIlroy card a joint-low-round-of-the-day 65 to move to 12-under par.

That leaves the World No.1 not only projected to finish first in the season-long DP World Tour Rankings, but also right back in contention for a third DP World Tour Championship having won here in both 2012 and 2015.

McIlroy is looking to win the first-ever DP World Tour Rankings title in its new title year, as well as a fourth overall points win following Race to Dubai victories on the former European Tour circuit in 2012, 2014 and 2015.

It would also bring up a season double, having already locked away a record third FedEx Cup trophy earlier this year on the PGA Tour.

McIlroy told GolfMagic and other media on site after his third round:

"It's really cool, I've got to this stage in the game over 15 years as a pro, and I'm still trying to do things for the first time. I've never won the FedExCup and this tour's rankings in the same year, so it would be really nice.
"It's been a wonderful year. I've played some really, really great golf and really consistent golf. If I'm able to go out there tomorrow and shoot a good score and get the job done, it would be a really nice way to end what's been a great year."

The best 2019 Race to Dubai champion Rahm can do in the DP World Tour Rankings, even with victory this week, is fourth place.

With 18 holes left to play, Rahm leads by one shot over Fitzpatrick, who despite finding water on the par-5 18th managed to save par for a round of 70.

Rather fittingly for the DP World Tour this week, the top two players on the leaderboard as it stands both received Honorary Lifetime Membership of the circuit earlier this week for their US Open victories in 2021 (Rahm) and 2022 (Fitzpatrick).

Whatever happens on Sunday though, Fitzpatrick still will not be attending the BBC Sports Personality of the Year awards.

On his chances of winning the DP World Tour Rankings, Fitzpatrick said:

"Yeah, it would mean the world.
"I'm going to need a lot of things go my way. I feel like this is the -- well, potentially, with what happens tomorrow, could be a third win here, and if it happens, it could be all three times I've not won the Race to Dubai.
"So yeah, maybe I guess I just leave it a little bit too late to play well but I've given myself a chance tomorrow, and that's all you can do at the start of the week. I'll do the best I can and fingers crossed."

Tyrrell Hatton shared the 36-hole lead with Fitzpatrick and all looked good on Saturday for the fiery Englishman, who dropped an outrageous F-bomb on Friday, until the wheels came off on the back nine.

Hatton had opened up a three-shot lead on the front nine, but four bogeys in the space of six holes from the 10th quickly derailed his charge.

Nevertheless, he two-putted for birdie on the 18th for a round of 72, and he still very much remains in the hunt for the tournament alongside McIlroy at 12-under par.

Tommy Fleetwood and Adrian Meronk, who can both still mathematically win the DP World Tour Rankings, are a further two shots back on 10-under par.

So what is required for those atop the DP World Tour Rankings heading into Sunday's final round at Jumeirah Golf Estates?

Well, it looks like it will be a two-horse race between McIlroy and Fitzpatrick.

But others are still in with a sniff.

Related: How to live stream the DP World Tour Championship

Fleetwood has the best outside chance of the remainder, while Meronk and Ryan Fox, well, need complete miracles.

Let's take a look at all the permutations for the five remaining players in with a chance of winning the DP World Tour Rankings...

A win is the only way McIlroy can guarantee winning the DP World Tour Rankings presented by Rolex.

The scenarios below show the possiblilties for the remaining four players in with a chance of wrestling the trophy out of McIlroy's hands.

If none of those play out, then McIlroy is your DP World Tour Rankings champion.

The main danger to McIlroy is without doubt Fitzpatrick...

With McIlroy just three shots behind Rahm at the moment in a tie for fourth as it stands, that could be a tough ask, especially given McIlroy seems to be rapidly moving through the gears as the tournament progresses.

Fitzpatrick can also win the DP World Tour Rankings if he comes second in the tournament, but then he must rely on McIlroy finishing worse than seventh place.

The Englishman will no doubt have one eye on what is happening in front of him on the Earth Course on Sunday afternoon, with two trophies and plenty of cash on the line.

Only either of those two permutations for Fitzpatrick will be enough for him to win his first rankings title.

The only other player realistically in with a chance of winning the race is last week's Nedbank Golf Challenge champion Fleetwood...

Fleetwood, who won the Race to Dubai in 2017, is currently six shots off the pace in the tournament. The Englishman quite simply must win the DP World Tour Championship in order to have any chance of winning the DP World Tour Rankings.

If he does that, then he needs to rely on McIlroy finishing worse than second place.

He also needs Fox to finish worse than second place, but given Fox is currently 14 shots off the pace that does not even enter calculations.

So Fleetwood could still take it all on Sunday, but it's highly unlikely.

Now for one of the remaining two outsiders, Meronk...

Meronk, who won his first DP World Tour title at the Irish Open earlier this year, has progressed nicely to 10-under par alongside Fleetwood after 54 holes.

But just like the Englishman, the giant Pole needs a giant finish on the Earth Course.

Meronk must win the DP World Tour Championship, and then McIlroy will need to completely blow out. I mean, we are talking a full proper blow out where he finishes outside the top 16.

So you're telling me there's a chance?

No. Not really. But mathematically yes.

Now onto the final contender, Fox, who started the week second in the rankings...

Fox has enjoyed the greatest golfing year of his life on the DP World Tour in 2022 and it would have been somewhat fitting had he gone on to win it this week, more so given he has played in the majority of DP World Tour events this season.

The New Zealander has won twice on the circuit this season, but you could argue he should have won at least three, maybe four or five times given just how many near misses he encountered in the final rounds, especially in recent months.

But on to what is required for Fox, and we are really building his chances up here for absolutely no reason because Fox is languishing down in tied 26th on 1-under par right now.

There are many permutations for Fox to win the DP World Tour Rankings, but they are all basically impossible now.

Anyway Fox fans, here are the permutations so we can help keep the dream alive:

Anyway, five players are left in the race for the DP World Tour Rankings on Sunday but realistically you have to think it will come down to a final-round shootout between McIlroy and Fitzpatrick.

McIlroy tees off alongside Noren at 7.50am (GMT), with Fitzpatrick out alongside Rahm in the final match of the day at 8.00am.

Who do you think will win it? Head over to the GolfMagic social channels to let us know…

Next Page: Revealed - Rory McIlroy's phone call to Cameron Smith urging him to stay on the PGA Tour after winning The Open