Victor Perez made his first-ever hole-in-one on the DP World Tour in the third round of the Porsche European Open to take a one-shot lead into Sunday. 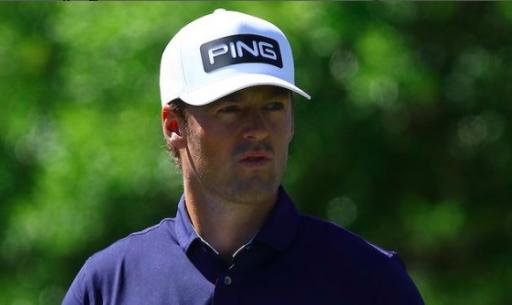 Victor Perez fired an amazing hole-in-one during the third round of the Porsche European Open on the DP World Tour to lead by one shot on 5-under-par.

Perez made his first-ever ace on the tour when he stepped on to the par-3 2nd hole. His ball bounced short of the pin on the 217-yard hole and perfectly dropped in the cup.

The World No.100 bogeyed the 13th and 15th holes at Green Eagles Golf Courses to fall back to 5-under-par. His second consecutive round of 71 was good enough to give him a one-shot lead over fellow Frenchman Julien Brun and Joakim Lagergren.

Having not won on the DP World Tour since 2019, Perez ended his three-year drought at the Dutch Open last week. He is now in position A to secure his third win on the circuit.

Haotong Li and Will Besseling are in tied fourth place on 3-under-par and two shots behind. Despite Haotong shooting a 63 in the second round in the Netherlands last week, he could only manage a tie for 37th place.

Jordan Smith entered the third round in Hamburg with a two-shot lead but his round of 77 meant he fell four strokes behind. The Englishman made six bogeys and a double-bogey to hinder his chances of a second DP World Tour win.

After opening rounds of 75 and 72, Tommy Fleetwood worked his way back into contention with an impressive round of 69 on Saturday.

The Englishman is enjoying a consistent season on the PGA Tour in 2022 and this has translated in Germany. He was one of only two players to break 70 in a tough third round.

He is on level-par and five shots behind Perez as are John Catlin and Edoardo Molinari who was announced as one of Henrik Stenson's vice-captains for the 2023 Ryder Cup this week.