Viktor Hovland FIRES himself into CONTENTION at BMW International Open

Viktor Hovland made eight birdies in his second round at the BMW International Open on his way to a round of 5-under-par. 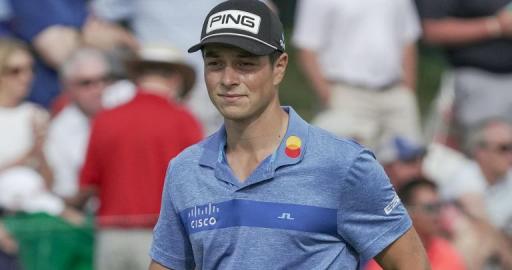 Viktor Hovland is well in the hunt to win his first-ever European Tour event after shooting 5-under-par in his second round at the BMW International Open.

The World No. 14 is 9-under-par for the tournament and just two behind Irishman Niall Kearney, who fired a four-under-par 68 of his own on Friday at Golfclub München Eichenried in Germany.

For the second round running, the young Norwegian bogeyed the second hole but then went on a scintillating run, making seven birdies in his next 11 holes to move to 10-under-par for the tournament.

The 23-year-old bogeyed the 14th and 15th holes but bounced back with a birdie at the par-5 18th hole. Hovland is just two shots behind Kearney who leads the way on 11-under-par.

Alongside Hovland in a tie for second place is fellow European Bernd Wiesberger, who won his eighth European Tour title at the Made in HimmerLand last month.

The big Austrian made five birdies and one bogey in his second round in Munich to shoot 4-under-par. His consistent play this season could make him a strong option for European Ryder Cup captain Padraig Harrington to consider in September.

Louis Oosthuizen, who finished second to Jon Rahm at the US Open last week, is once again in contention in Germany after finishing on 7-under-par for the week on Friday.

The 2010 Open champion made a fantastic eagle at the par-4 4th hole on his way to a solid score of 5-under-par, he is just four shots behind Kearney with two rounds left.

NEXT PAGE: BUBBA WATSON ACCIDENTALLY BREAKS HIS DRIVER AT THE TRAVELERS CHAMPIONSHIP