Bubba Watson accidentally BREAKS HIS DRIVER at the Travelers Championship

Bubba Watson is having another solid week at the Travelers Championship, but he experienced an unexpected situation during his second round. 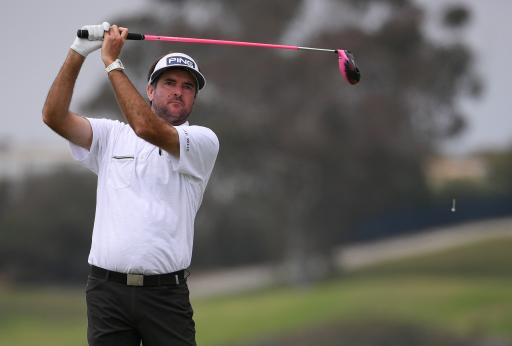 Two-time Masters champion Bubba Watson accidentally snapped his driver during his second round at the Travelers Championship.

Watson took a standard, big and powerful swing at his ball and incredibly, it seemed that Watson managed to slow his swing down as soon as he made contact with the ball.

As he struck the ball and it flew down the fairway, the pink head of Watson's driver came flying off in a rare and unexpected turn of events.

Afterwards, Ted Scott, Watson's caddie, took the head and attempted to fix the broken club head so that a new shaft could be slotted in.

This is not the type of occurrence to phase the World No. 61 and especially not at TPC River Highlands, where he has performed so well in the past.

Watson beat Scott Verplank and Corey Pavin in a playoff in 2010 to pick up his first win at the tournament, he then doubled his tally in Connecticut in 2015. Watson became only the second player to win the Travelers Championship three times in 2018, completing a three-stroke victory.

The 42-year-old is on course to challenge once again this season, he fired a four-under-par 66 to sit three shots behind Kramer Hickok and Satoshi Kodaira after the first round.

In terms of his driver, a player with Watson's power and shot-shaping ability will certainly be capable of navigating the rest of his second round.