European Tour player Pedro Figueiredo saved from FALLING in WATER by his caddie!

Pedro Figueiredo was having a torrid time on Friday at the BMW International Open when things almost got a whole lot worse. 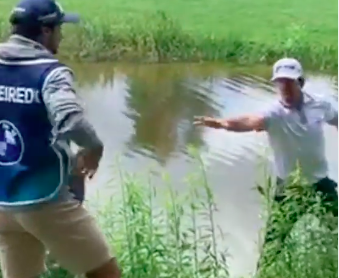 If there was an award for "caddie of the year" on the European Tour, Francisco Ataide would be one of the frontrunners for his actions at the BMW International Open on Friday.

Pedro Figueiredo found himself with an extremely difficult shot on the edge of a pond at Golfclub München Eichenried, with his feet almost in the water.

As he hit the ball, Figueiredo lost his balance and as it looked as though he was falling into the water, his caddie Ataide grabbed his hand to pull him to safety.

But as Ataide pulled his player to safety, he fell to the floor on the cusp of the water hazard. Luckily, both men were fine by the end of the ordeal and able to continue their round.

For one moment, it looked as though both Figueiredo and Ataide could have ended up in the water in what was a concerning yet entertaining turn of events.

It has been a week to forget in Germany for the Portuguese player, who entered his second round on 8-over-par after shooting 80 on Thursday.

"Matt Kuchar would flip this guy a shiny nickel for the effort," another fan commented.