Viktor Hovland has revealed what he has spoken to Manchester City forward Erling Haaland about over text messages before the DP World Tour Championship. 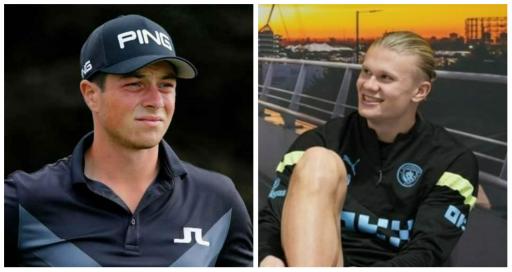 Hovland was speaking ahead of the DP World Tour Championship in Dubai after Rory McIlroy called for LIV Golf commissioner Greg Norman to quit.

That's before the Northern Irishman cracked up over the breakaway tour's dilemma over gaining Official World Golf Ranking accreditation.

But back to Hovland. After having some more trouble with an airline this week, the young Norwegian revealed that he doesn't follow football too closely but he understands that Haaland is a "big, big deal."

As of 15 November 2022, Haaland had scored 23 goals in all competitions for Manchester City since signing from Borussia Dortmund in a £51m deal in the summer.

Hovland said he knows Haaland "a big watch" guy. And it appears that Hovland is also massively into his timepieces.

GolfWRX reported after Hovland won the Dubai Desert Classic earlier in the season he was wearing an Audemars Piguet Royal Oak Double Balance Wheel Openworked on his wrist that cost a small fortune.

And maybe Hovland will teeing it up with Haaland in the future judging by his comments about the 23-year-old.

Q. "This is an off-one and I don't even know where I'm asking it really. Have you ever met Erling Haaland?"
VIKTOR HOVLAND: "I have not met him."
Q. "What do you know about him? Do you know much about him?"
VIKTOR HOVLAND: "I don't follow football very much. We've exchanged some messages online. Obviously keep up a little bit in the media. Obviously what he's doing is pretty incredible. It's cool to watch from that perspective, but I don't follow football too closely but I know he's a big, big deal."
Q. And he's a keen golfer himself, did you know that, and is that what the messages were about?
VIKTOR HOVLAND: "No, I did not know about that. I know he's a big watch guy. So we were talking about watches a little bit back and forth. But no, I didn't know he played golf."

As for Hovland's equipment dilemma, he has confirmed that his clubs arrived in time for the pro-am ahead of the $10m season finale.

The aforementioned McIlroy is the hot favourite to win his fourth Race to Dubai. Defending champion Collin Morikawa has revealed why he's not playing this week.

Hovland will be playing the first two rounds at Jumeirah Golf Estates alongside former Open champion Shane Lowry in the 12.25pm tee time on Thursday.