Viktor Hovland appears to have equipment troubles once again with an airline as he travels to the DP World Tour Championship in Dubai. 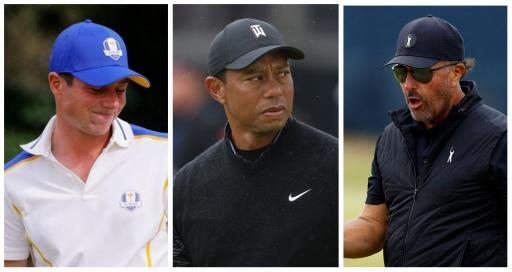 Some things in life just seem to be a given. One of them is Viktor Hovland having trouble with airlines.

Back at the start of the year Hovland was left incandescent with rage after his PING G425 LST driver arrived snapped while in the possession of Delta on the eve of the Sentry Tournament of Champions in Hawaii on the PGA Tour.

Hovland told Delta to "get their s***t" together. England's Matthew Fitzpatrick also had similar problems with the airline this year, too.

This was off the back of Hovland having his driver snapped in November before the World Wide Technology Championship in Mayakoba.

Although on that occasion the break came courtesy of fellow Tour pro Danny Lee who had borrowed it for a speed training session. Whoops!

Which leads us to November 2022 and Hovland has once again had issues. Or shenanigans, as he put it on his Instagram. His golf bag has gone walkabout.

Those great rivalries have nothing on Hovland versus Airlines.

Hovland is travelling to the DP World Tour Championship in Dubai where the leading 50 players in the rankings will peg it up at Jumeirah Golf Estates over 17-20 November.

GolfMagic will be providing live updates as Rory McIlroy attempts to win the Race to Dubai. McIlroy is the hot favourite and he could win the former European Tour's order of merit for a fourth time.

New Zealand's Ryan Fox can pip the Northern Irishman. Fox missed out on another win at the Nedbank Golf Challenge last week to a tearful Tommy Fleetwood after a nightmare 72nd hole.

There are a number of big names who are set to miss out in the season-ending $10m event. Will Zalatoris is still struggling with a back injury while reigning Race to Dubai champion Collin Morikawa - who cannot win the honour again - is also not in the field.

Morikawa looks like he won't be participating because he's likely getting married to Katherine Zhu.

Belgium's Thomas Pieters is also having a good season on the DP World Tour but isn't in the field either because his partner is due to give birth.

As for Hovland, we'll have to keep tabs on the shenanigans.