PGA Tour player Viktor Hovland has weighed in on the debate about whether LIV Golf should get world ranking points ahead of the ZOZO Championship in Japan. 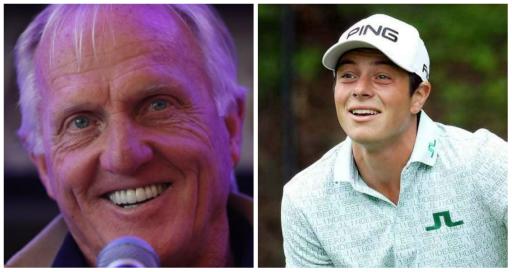 Viktor Hovland has weighed in on the debate about LIV Golf potentially getting world ranking points soon, suggesting the breakaway tour "can't make up rules as you go".

Hovland is in Japan ahead for the ZOZO Championship on the PGA Tour, where Hideki Matsuyama has this week batted away more speculation about his future path after being linked with a move to Greg Norman's league.

It is clear that LIV Golf's battle versus the Official World Golf Ranking [OWGR] is becoming increasingly ill-tempered.

Graeme McDowell just thinks people are "playing games" as he vented his frustration at the OWGR this week ahead of LIV Golf Jeddah.

Dustin Johnson believes the decision will be sorted out swiftly, despite "regretting" his decision to join LIV.

LIV submitted an application for accreditation before the 150th Open at St. Andrews in July, where the R&A asked Norman to stay away from the past champions' dinner.

That application, LIV believe, is being slow-played because those who sit on the OWGR board and oversee the process appear financially threatened by Norman and company.

If you didn't know, that board comprises of - among others - the likes of PGA Tour chief executive Jay Monahan, DP World Tour boss Keith Pelley and R&A chief executive Martin Slumbers.

All have been vocally anti-LIV.

Norman wants these people recused from voting on LIV's application.

Of course, it appears that LIV are under pressure from their players to get OWGR points quickly.

Last week it appeared that LIV Golf just may have found a loophole when they announced a "strategic alliance" with the MENA Tour.

The MENA Tour previously gave out world ranking points but they haven't played an event since the beginning of the pandemic.

However, it was clear that LIV believed that by tying themselves to the MENA Tour and announcing that all of their players were members it should have resulted in OWGR points being handed out immediately for their event in Bangkok.

That didn't pan out.

The OWGR released a statement saying they would review their application.

As for Hovland, who sat in front of the media at Accordia Golf Narashino Country Club, the three-time PGA Tour winner suggested LIV should "follow the process".

"So I don't know all the different regulations and how difficult it is to get world ranking points," the 25-year-old said.

"I just think at the end of the day, if you want to get world ranking points, you obviously have to follow the process.

"And I think they're obviously making an effort to get those points, but I don't think it's right to give them an exemption to just get points overnight. They obviously have to follow the process, whatever the process might be.

"But at the same time, they have some really good players over there and if some of those players drops outside the top-100 in the world, that's not good for the World Rankings, either."

He added: "So I don't really know what the right answer is, but you can't just make up new rules as you go."