You may have missed this from Rory McIlroy after calling on Greg Norman to quit... 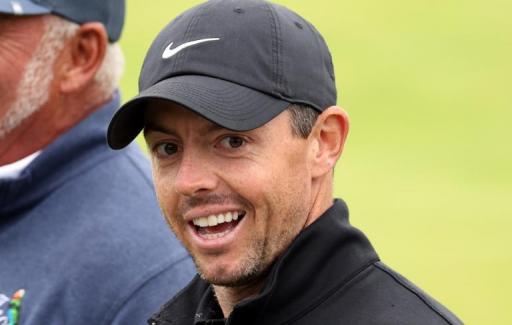 Rory McIlroy believes the revamped Official World Golf Ranking (OWGR) is the "fairest system" that can be compiled right now, but he could not help but stifle a laugh where LIV Golf is concerned.

Just moments after firing a brutal warning in the direction of LIV Golf CEO Greg Norman, the World No.1 then finished his press conference in front of GolfMagic and other golf media by weighing in on what he makes of the current world ranking dilemma facing the sport.

McIlroy began answering one journalist's question as to whether or not he thought it was fair the winner of this week's flagship DP World Tour Championship receives only 22 points rather than the 38 points on offer in a fairly weak PGA Tour field at the RSM Classic.

The Northern Irishman appeared strongly in favour of the points divisor due to the simple fact there are 94 more players competing on the PGA Tour this week.

"Yeah, so when you look at two different fields, you've got a 50-man field here versus a 144-man field there," said McIlroy, who is bidding to win his fourth DP World Tour Rankings title this week.

"So just in terms of how the strengths of field is calculated, they have 90 more players to contribute to their strength of field.

"So the reason that this has got 21 points (it is 22) and the RSM has got 39 (it is 38) is the person that wins the RSM has to beat 139 other guys. You only have to beat 49 other guys here. It's a much fairer system. I think it rewards people that -- it's pure numbers. Strength of field has not hurt people feelings.

"Has it upset people? Yes, because people have been used to getting a certain amount of World Ranking points in one event and now it's dropped. But I would say those events were getting more than they should be."

McIlroy believes the refreshed OWGR system has taken years of work and thought, but it will still need more time to settle.

He added: "I think it's the fairest system that you can come up with right now. And a lot of work went into that, five years of algorithms and analysis and work went on into the system, so it's not as if it changed overnight.

"A lot has gone into it. It's the best one that we can come up with right now, and I think it will take a while. It will take another 18 months for it to play out because everyone gets two years into the rolling system.

"It's a little bit -- as it's being rolled out, there's a little bit of discrepancy, but once we get two years into it and have the minimum divisor and all the events."

McIlroy then signed off with this final line, followed by a smirk and a laugh.

"I think you'll see a fairer reflection of where everyone is ranked in the world... that is eligible to be ranked, I have to add that caveat."

The OWGR published a document with their changes in August, which you can read here. A total of 23 tours are currently listed as being eligible for world ranking points. The PGA Tour and DP World Tour are of course named. But there is no room for LIV, at least right now.

Former World No.1 players such as Cameron Smith, Dustin Johnson and Brooks Koepka are now tumbling down the pecking order in the OWGR as a result of them being shut out of receiving world ranking points.

For many LIV Golf players, especially those without major exemptions, there remains fear they could miss out on the majors.

Even Smith is getting worried. The 150th Open champion believes all the LIV Golf criticism is "bizarre" as he claims OWGR is "conflicted".

The biggest issue for LIV Golf is that they still operate as 54-hole tournaments and comprise 48 players with a shotgun start.

However, LIV Golf President is "optimistic" that they will soon receive a green light.

And even two LIV Golf players have come to blows over it all.

Will LIV Golf finally receive OWGR points or will they continue to be shut out? Share your thoughts and comments over on the GolfMagic social media channels.

Next Page: Tommy Fleetwood reveals the simply ruthless comment from his son