European Tour commentator Wayne 'Radar' Riley did not hold back on his opinion of big-hitting Bryson DeChambeau. 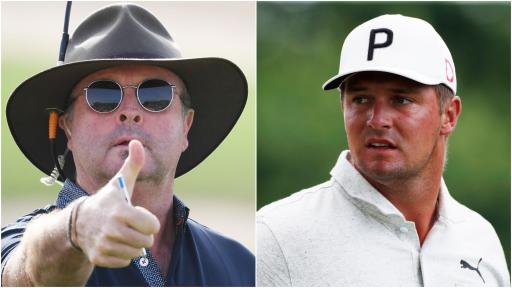 Wayne 'Radar' Riley ripped into the "boring and dull" strategy of Bryson DeChambeau during second round of the European Tour's Saudi International.

DeChambeau's style of play certainly divides opinion, with some praising the 27-year-old for his new found speed off the tee, whilst others believe his quest for distance is bad for the game.

Speaking to Sky Sports presenter Nick Doherty, Riley was asked what he makes of DeChambeau's new approach to the game and the Australian didn't hold back.

"The way he goes about it you cannot knock it but for me I find it boring," said Riley. "I find what he does dull, because all he does is he stands up there like Happy Gilmore, tees it about four feet in the air and just gives it to him.

"Okay, that's fun for the amateur to watch but I'm more of a person who wants to go out there and I want to see creative shots. I don't really want to go out there and watch someone just absolutely cannon it 400 yards and flick it onto the green and then give it the robotic [putt].

"It's just not me. Look, I understand, I get it. I get that a lot of people love him but me, I'm a little bit more of a golfing connoisseur, I like to see creativeness, I like to see sexiness about the game and to me he just muscles it and bullies it."

DeChambeau, whose power off the tee played an important role in claiming his maiden major title with the US Open at Winged Foot, shot a 5-under par opening round at Royal Greens Golf & Country Club on Thursday and will be hopeful of closing the gap to the top of the leaderboard during round two.