Bryson DeChambeau was hitting bombs on the range and golf fans are all having their say om his swing, which features some unique footwork. 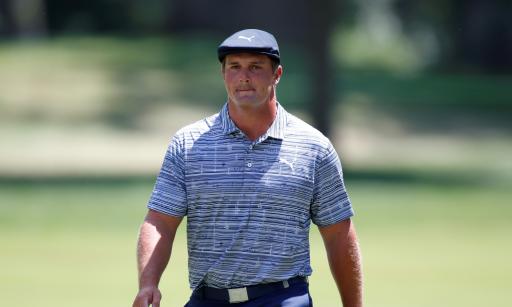 A slow motion video of Bryson DeChambeau ripping a drive on the range at Royal Greens Golf & Country Club has got golf fans talking, as he tried to hit the ball as hard as he can, causing some pretty unique footwork.

DeChambeau has been trying to add more ball speed to his game and his speed training sessions have caused him to come close to blacking out due to the high level of intensity.

The reigning US Open champion shot a 5-under par opening round at the Saudi International on Thursday and currently sits just four shots behind leader David Horsey.

On Wednesday, DeChambeau was at the range putting in the final preperations and Sky Sports Golf presenter Iona Stephen captured a slow motion video of the 27-year-old going at it with his driver.

WATCH DECHAMBEAU'S DRIVER SWING IN THE VIDEO BELOW:

DeChambeau was clearly swinging very hard in the video filmed by Stephen and his club speed is so fast that it causes him to have some pretty unique footwork during the follow through.

"Looks like he’s about to bifurcate his ankles," said one golf fan.

"I do understand why the purists hate the way he plays but I think it has drawn in the fans. It doesn't always go right but when it does, he is quite a force of nature and very watchable. He was brilliant in the US Open, won with guile and gorilla like strength."

"When observing any athlete who is good at their sport, their performance is normally aesthetically pleasing to watch. Sorry but there isn’t anything pleasing about watching that swing."