Will Zalatoris hit a shot that we have rarely seen the like of on the PGA Tour in the first round of the Genesis Scottish Open on Thursday... 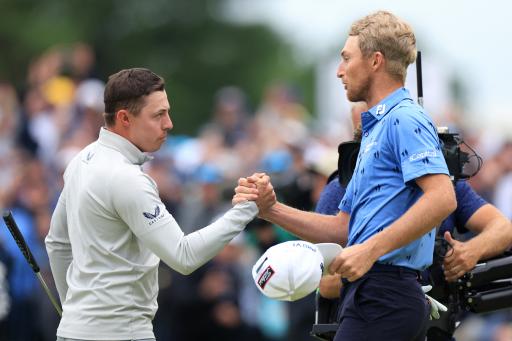 We have recently learned that when Will Zalatoris and Matt Fitzpatrick play together, there are fireworks and you have to expect the unexpected.

The unexpected appeared between the pair once again in the first round of the Genesis Scottish Open when the American hit a chip up close to the pin on the par-5 16th hole.

His ball rolled about seven feet behind the pin and stopped perfectly on top of Fitzpatrick's ball marker. The group shared a laugh and Collin Morikawa's caddie J.J. Jakovac took a picture of the incredible moment.

Despite being one of the best players on the planet, Zalatoris would struggle to do this again even if he tried. They both made par on this 576-yard hole.

Unfortunately for this pair, they played on Thursday afternoon at The Renaissance Club which was the hard and windy side of the draw. They both shot 1-over-par which was 10 shots worse than Cameron Tringale.

Tringale put on an incredible display in North Berwick. He made nine birdies and no bogeys on his way to a 61. This tied the course record and this was his lowest ever score in his tour career.

Zalatoris, 25, is arguably the best player in the world yet to record a victory on the PGA Tour and he came second again at the US Open in Brookline to Fitzpatrick.

They endured an incredible battle, but fate decided that the Englishman would win his maiden major title at the venue where he also won the US Amateur.

Zalatoris also lost in a playoff at the US PGA Championship to Justin Thomas and he finished second behind Hideki Matsuyama on his Masters debut in 2021.