Despite finishing bogey-bogey, Xander Schauffele carded a 66 to set the pace by two shots heading into the final round of the Genesis Scottish Open. 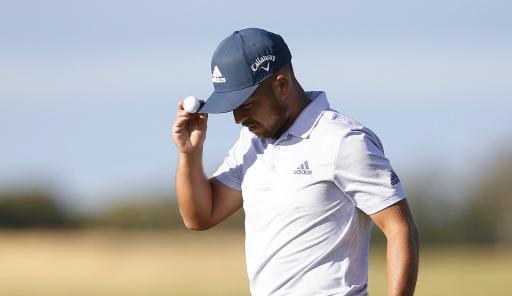 Xander Schauffele kept up his hot run of form in the third round of the Genesis Scottish Open, carding a 66 to burst into the lead when 36-hole leader Cameron Tringale struggled.

The American, who won the Travelers Championship at the end of June, began the day three shots behind Tringale who is looking for his first win on the PGA Tour/DP World Tour.

Schauffele made birdies on the 3rd and the 6th holes, but his round caught fire at the beginning of the back nine, right around the time when Tringale made three consecutive bogeys on holes 6, 7 and 8.

He will have regrets about his last two holes as he stumbled into two bogeys, but his round of 4-under-par was enough to take him to 7-under, two ahead of 2017 Scottish Open winner Rafa Cabrera Bello.

The swing of the new solo leader @XSchauffele is two clear of the chasing pack on Moving Day. #GenesisScottishOpen | #RolexSeries pic.twitter.com/ouJpKbYcxO

The Spaniard made two bogeys in his opening six holes, but he came into his own at the start of the back nine with an eagle on the 10th hole, followed by three consecutive birdies.

His birdie run ended on the 15th when he gave a shot back to the East Lothian course, nonetheless, he carded a 67 to go with his pair of 69's to finish on 5-under-par for the week.

It simply wasn't Tringale's day and he carded a 74 to fall back to 3-under-par in what was an incredible turn of events with the new leader Schauffele.

Jordan Spieth made two eagles on Saturday at The Renaissance Club to lift himself from level-par to 4-under-par. He shot a 66 and fellow PGA Tour winner Ryan Palmer shot a 67 with a bogey on the final hole to sit on the same score.

There are 19 players within six shots of the lead including US Open champion Matt Fitzpatrick (-3), Patrick Cantlay (-1), Max Homa (-2) and Tommy Fleetwood (-1).

Next Page: World's top players miss the cut at the Genesis Scottish Open