The golf driving iron can save you shots fast off the tee - here are seven going for less than a Bullseye on eBay this week... 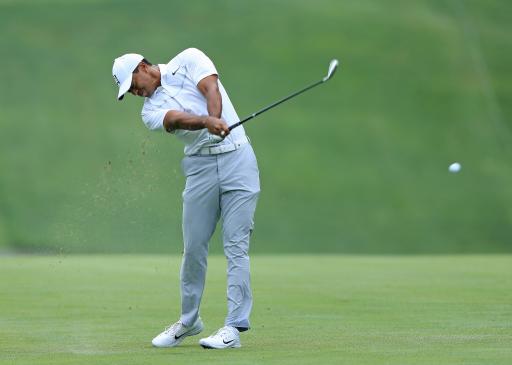 The golf driving iron is the perfect option for anyone currently struggling with their driver off the tee or failing to hit clean hybrids off the fairway.

Okay you will need to give up some distance by doing so if you're taking a driving iron over a driver. That's fairly obvious. But wouldn't you rather you were in the middle of the fairway more often than not and taking an extra club into the green instead of sending a search party to find your ball in the trees?

Typically set at around the 18 to 21-degree mark, the driving iron is many people's favourite option off the tee because of its ease to hit straight and cleaner off a tee peg. Think of it as a long iron like a 2, 3 or 4-iron, but with a little more power packed behind it.

Many amateurs we speak to also claim to feel more confident standing over a driving iron than a hybrid, for example.

They aren't particular expensive either, which only adds to their appeal. Let's take a closer look at SEVEN awesome driving iron models currently doing the rounds on eBay, each for less than a Bullseye...

One of our favourite driving irons on the market right now. Packed full of power, lots of forgiveness and looks great behind the ball. Great feedback on off-centre strikes, too. Easy to see why Rickie Fowler has dabbled with this one before.

Currently available on eBay for £35, which is an absolute steal.

Not exactly the newest member to enter the driving iron category, and it has been used according to its writeup, but for its current asking price of £23.40 on eBay it's just too good to not flag up. We used this one a while back and as you'd expect for a Mizuno iron, it's incredibly sweet.

Forgiving, long, easy to hit, and looks incredible in the bag. You won't want to put this one down. You may have yourself the deal of the century if you pick this one up for its current price of £50 on eBay. Apparently it's been used but its condition is "basically brand new". Well worth a look.

Currently available on eBay for £35 and it's brand new so looks a terrific price. A driving iron that will certainly do a job for you. Check out the deal on eBay here.

One for the better players out there, but a superb club for its current asking eBay price of £40. It has a beautiful gun metal finish and looks in superb condition having only been used a couple of times.

A superb driving iron option, especially for single-figure players. It offers a lovely penetrating ball flight and plenty of power. This one comes with a Dynamic Gold S300 XP105 shaft and clean Golf Price MCC Align grip. Looks a steal at £45 on eBay right now.

Another awesome player's driving iron from Titleist, this time with the 716 2-iron featuring a Project X 6.0 stiff shaft. It looks a superb price at £44 on eBay as things stand. Despite having been used, it still looks in good condition.