Wisconsin's state slogan is 'America's Dairyland' for being one of the country's largest dairy producers, so this has led to adidas' new limited-edition shoe. 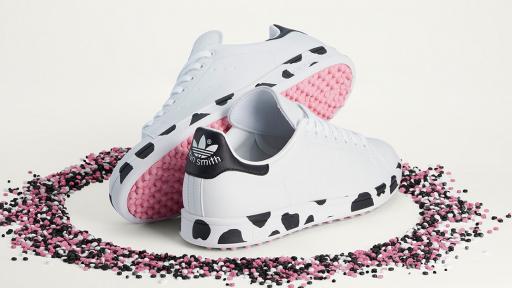 The Ryder Cup is due to be held at Whistling Straits in Wisconsin, which is known for being one of the nation's leading dairy producers.

With that in mind, adidas got their herd of designers together to create a limited-edition Stan Smith Golf shoe that pays tribute to the animals responsible for Wisconsin’s distinctive title: the cows.

This time around, adidas didn’t look to names like Johnson or Garcia for inspiration. Instead, they looked to names like Ayrshire, Guernsey and Holstein - just some of the famous breeds that have been awarded the sought-after title of "Wisconsin’s Cow of the Year."

The Stan Smith is the classic silhouette that adidas first brought to golf earlier this year. adidas are continuing the tradition with this model, which will feature an all-white upper, a playful spotted cow print on the midsole, and a pop of pink on the outsole.

RELATED: BROOKS KOEPKA ON PGA TOUR LIFE: "I DON'T KNOW MY TIME OR WHO I'M PLAYING WITH"

adidas Golf have made special sock liners to continue the spotted-print theme, which include a logo of a fictitious club - "Dairyland Golf Club" - in honour of this historic locale.

The Stan Smith Golf features the adiwear rubber spikeless outsole with traction inspired by the shoe’s original sole design. They included a die-cut PU sock liner and additional PU cushioning in the midsole to provide golf-specific support in every step.

There are some subtle features included to make this product truly unique, like a special “MOOO” endorsement from the cows themselves on the tongue and a shoe bag that carries the spotted-print theme with the END PLASTIC WASTE and "Dairyland Golf Club" logos.

"Knowing how anticipated this event would be, we wanted to do something different and unexpected," said Masun Denison, global footwear director, adidas Golf.

"We’ve done a few designs around this competition in the past and thought it would be fun to look at the location as a whole, not just something that focused on the two teams.

"This idea of America’s Dairyland kept coming back to us, so we decided to have some fun with it."

This version of the Stan Smith Golf will be available in limited quantities on adidas.com, the adidas app, and at select retail partners worldwide beginning Monday, September 20.

NEXT PAGE: BERND WIESBERGER: AUSTRIAN HAPPY TO FLY UNDER THE RADAR AT RYDER CUP