Brooks Koepka on PGA Tour life: "I don't know my time or who I'm playing with"

Brooks Koepka is a four-time major champion and an eight-time PGA Tour winner, and he makes it sound both simple and intense. 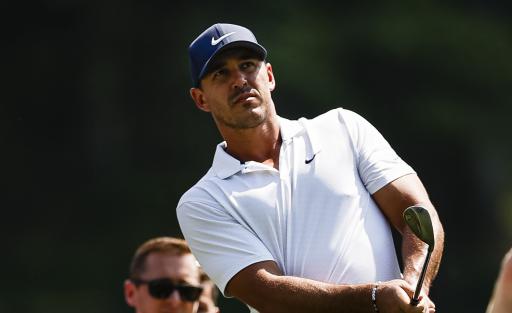 Brooks Koepka revealed that sometimes he doesn't know who he is playing with or when he is teeing off at tournaments on the PGA Tour.

Now the season has finished, Koepka must now focus on his fitness for the Ryder Cup, after he pulled out of the Tour Championship with a wrist injury.

Speaking to Golf Digest, Koepka spoke about many things and one of them was PGA Tour life and his approach to each event. The 31-year-old has eight wins on tour and four major championships to his name.

"A lot of times when I go to the course, I don’t know who I’m playing with or even my tee time. I just know it’s in the afternoon," said Koepka.

"If I break down a major week, it’s so chill. You wouldn’t even believe me. I go to the course. I play nine holes. I go work out.

"Other than that, I’m sitting and watching TV, taking my mind off golf with relaxing stuff. The physical part, I can handle. The mental side, you have to be able to turn it off.

"Sometimes, the power comes from being able to turn it on. But for me, I get power from turning it off. That’s been a huge, huge thing for me that I really haven’t understood until the past five or six years of my career."

It is fair to say that the World No. 9 has ground his way into a position of comfort, a grind that started in 2015 by winning the Waste Management Phoenix Open.

Two years later, he won his first major tournament at the US Open and by the end of 2019, he had four major trophies on his mantlepiece in no time at all.

His demeanour on the course at PGA Tour events is one of complete focus and concentration and his motivation comes from his obsessive desire to beat his opponent.

"I take satisfaction from beating everybody more than anybody knows. I take so much satisfaction that there’s something wrong in my head about it," added Koepka.

"It doesn’t matter what we’re doing, it’s so intense. I might not always show it, but I’m so intense inside at wanting to beat the living crap out of you at whatever we’re doing.

"It eats me up inside. We could be playing ping pong or cornhole or whatever. I just want to embarrass you. If golf wasn’t the “gentleman’s” sport it is, I would trash talk my entire way through it."

As well as his approach to his golf career, Koepka spoke about many things to Golf Digest, such as his aim to win more major championships than Tiger Woods and his failure to beat Phil Mickelson at the USPGA in May.