THIS IS WHY you should play Callaway Chrome Soft Golf Balls!

In this video, Alex from Golfmagic takes the Callaway Chrome Soft Brand to Kings Golf Studio to put it up against a direct competitor. 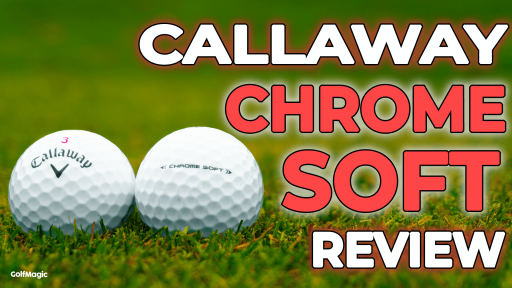 The Callaway Chrome Soft golf balls have grown to be very popular because of their performance and versatility on the golf course.

The current RRP of the Callaway Chrome Softs is £39.99, which is significantly cheaper than other ball options from brands such as Titleist and TaylorMade.

Alex took the Chrome Soft balls and tested them against a set of Titleist Pro V1 golf balls to see how they compared when being hit with an iron and a driver.

The key difference between these two golf balls is the spin that they produce. The Titleist Pro V1 produces a lot more spin than the Callaway balls, which may not suit all golfers.

The spin rate variance was very similar with the drivers as well. A lot of professional golfers use the Pro V1 as they produce a lot of spin and they have the ability to be stopped dead by the pin.

This is why the Callaway Chrome Soft golf balls are very strong in the market because they produce very consistent shot distances and spin control.

Jason Finley from Callaway spoke to GolfMagic about their mission to provide a ball for every golfer and a ball that can adapt to the player's needs.

"The Chrome Soft family for us has become a really big part of the momentum and growth we have seen in the golf ball category," said Finley

"We have done that by ensuring that we have a Chrome Soft model for every type of golfer there is. From where we started with Chrome Soft to where we are today, has really been rooted in the golfer and what can we deliver to the needs of that golfer.

"The Chrome Soft, or the Red Box as we call it, really covers a pretty broad stroke of golfers and thinks about what that golfer is looking for."

Callaway has experienced longstanding success on the PGA and European Tours and this has been down to the quality of their golf club production as well as looking after every golfer with their golf ball models.

Jon Rahm, Phil Mickelson, Xander Schauffele and Marc Leishman all play Callaway and their success shows that Callaway is reliable and performs well.

"This year, we've had better results on tour than we have ever had before. We have two majors on the PGA Tour with Phil Mickelson and Jon Rahm both playing and winning with the Chrome Soft X golf ball," Finley added.