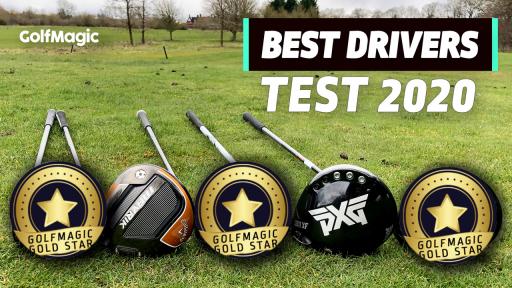 When it comes to buying a new driver, there are a lot of factors to consider. You need to think about the standard of golf you play and what it is you're looking to get out of your big stick. Well if you're in the market for a new driver, GolfMagic is here to help...

Some drivers are designed for the better player and will produce low spin, but they might be a little harder to use than some others out there, so if it's forgiveness you need, then you're not going to want to buy the same driver that you see in the hands of Rory McIlroy.

We're always testing the latest golf products available and while the majority of what's out there remains impressive, there are certain clubs that tend to leave a mark more than others.

We recently tested our five favourite drivers currently on the market, some of which are there for distance, some for forgiveness and some just pure great value for money. Check out the video below to see which drivers made GolfMagic's favourite five.

We’re kicking things off with the TaylorMade SIM driver launched earlier this year. SIM stands for Shape in Motion and TaylorMade have created a clubhead that glides through the air like never before.

The SIM driver features a raised crown and sole to reduce airflow throughout the swing, while the Inertia Generator has been placed low and back with a heavy steel weight at the rear to optimise launch and increase forgiveness.

It features a sliding 10g weight so you can adjust the driver to provide a fade or a draw bias. At address, it's our favourite driver by an absolute mile.

The chalk white top line works beautifully in contrast with the carbon crown and the twisted Inertia Generator can’t be seen when standing over the ball.

The SIM driver provides low spin with a penetrating launch and suits the better player who places a premium on adjustability and control. It has an RRP of £479 and has proved to be one of the longest drivers we’ve tested in a long time, making it an easy choice for GolfMagic’s favourite five.

Find out more about the TaylorMade SIM driver here.

Up next we’ve got the SPEEDZONE driver from Cobra. Inspired by the world of super cars, the latest driver from Cobra optimises six unique zones of performance to deliver speed and distance.

It features a CNC Infinity Milled face, the only driver on the market to use CNC Milling, while the Titanium T-Bar Speed Chassis provides a low CG and high inertia, making it fast and forgiving.

Combining aerodynamics with a low center of gravity continues to be a strength that COBRA delivers with its drivers. The new SPEEDZONE shaping harnesses airflow for maximum drag reduction and increased clubhead speed.

SPEEDZONE’s High MOI Design positions weight away from the center of the head to maximize stability on off-center hits for longer, straighter drives.

In terms of design, the SPEEDZONE driver is one of, if not the best looking driver on the market today, with the black and racing yellow colours creating a striking contrast.

This driver is fast, long and it simply looks phenomenal. With an excellent price point of £349, the Cobra SPEEDZONE raced into our favourite five.

Find out more about the Cobra SPEEDZONE driver here.

The Cleveland Launcher HB Turbo is a driver that seriously took us by surprise this year and you probably didn’t expect to see this in our favourite five.

With Cleveland Golf being most famous for its wedges, we didn’t know what to expect with the Launcher HB Turbo driver, but it packed a certain wow factor at an extremely affordable price.

It features a Turbocharged Cup Face that provides a higher COR area for increased ball speeds and distances that no other Cleveland driver has offered before.

The latest driver from Cleveland provides fantastic accuracy off the tee, achieved through the HiBore Crown that lowers the centre of gravity, while the Ultralight Hosel redistributes weight low and deep in the head.

The Launcher HB Turbo has a matte black and smokey grey finish which looks fantastic on the aerodynamic head, which fills you with confidence at address.

It’s also one of the most forgiving drivers we’ve tested and it’s a great option for those players who need a little more help off the tee. With an RRP of £309, it’s one of the best value for money drivers on the market today.

Still leading the way for PXG in the driver category is the 0811 GEN2 models, with both the 0811 X and 0811 XF proving to be two of the best drivers money can buy, but we’ve leaned towards the XF for our favourite five.

XF stands for Extreme Forgiveness, but don’t be fooled by the name, because this driver is also seriously long. Featuring Hot Rod technology and inspired by the look and extreme performance of American muscle cars, the PXG 0811 XF GEN2 driver is designed for out-and-out forgiveness and raw power.

The deep CG location and weight back design provides a mid-spinning driver that produces higher launch conditions with increased MOI, to offer forgiveness in the most premium-designed driver on the market.

The PXG 0811 XF driver is crafted with a multi-level and variable thickness carbon crown design, creating faster ball speeds. This driver produces amazing sound and feel and at address it’s one of our favourite drivers out there.

If you’re looking for a high level of forgiveness without sacrificing distance, then look no further than the PXG 0811 XF GEN2 driver.

For more information on the PXG 0811 GEN2 click here.

For the first time, Callaway has used A.I to create a new internal rib system designed to more efficiently control impact vibration to promote more satisfying sound and feel, something that we could notice after the very first hit.

We love the aerodynamic ‘bullet’ shape of the MAVRIK driver and the fact that Artificial Intelligence is used to provide forgiveness.

Jailbreak Technology is one of the most successful driver technologies in years and the use of A.I makes the Callaway Mavrik the most technologically advanced drivers on the market.

The colourway of the Mavrik is a real improvement from last year’s Epic Flash and it certainly stands out amongst the crowd. It has an RRP of £469 and with the Mavrik’s combination of long distance and high forgiveness, it simply had to be a part of GolfMagic’s favourite five.

For more information on the Callaway MAVRIK driver click here.

We'd love to hear which driver YOU have in the bag right now! Is it one that's new for 2020 or an older driver that still holds your trust? Let us know through our social media channels on Facebook, Instagram or Twitter!