Callaway Golf decided to take a trip down memory lane and fired a dig towards TaylorMade in their latest Instagram post. 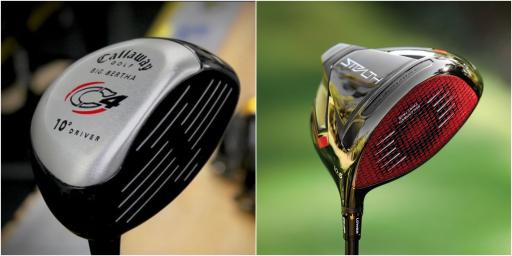 Callaway Golf appeared to have a not-so-subtle dig at TaylorMade with an interesting throwback.

That throwback was to an image of one of their drivers they launched more than 20 years ago...with a carbon face.

WATCH: PAIGE SPIRANAC REVEALS SHE IS SWITCHING TO THE NEW TAYLORMADE STEALTH DRIVER

"Our face technology has moved on quite a bit since then," they write.

If there's one thing we can surmise from this post, it's that there was nothing "stealthy" in this broadside.

Related: Five reasons why the Stealth is no gimmick

The new TaylorMade drivers sent a buzz through the golf world with it's eye-catching design.

They released the line on the same day Callaway Golf made several equipment drops, too.

Tiger Woods was the first to debut the Stealth Plus at the PNC Championship in December.

Now all of the TaylorMade equipment staffers have it in their bags.

We have reviewed all of the latest equipment on our YouTube channel.

Golf fans saw the funny side of the post.

"I see what you're doing there."