This drone umbrella is designed for golfers

A Japanese company has developed an umbrella drone for golfers - but it doesn't come without issues. 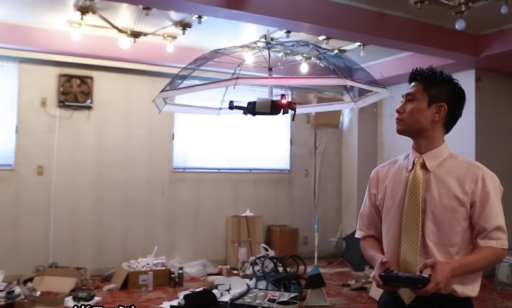 The drone of the drone could frequent a golf course near you in the coming years.

Because the drone - formerly used by tech-lovers as flying cameras - has been adapted to be employed as a flying sun umbrella for golfers, in what is perhaps the most over-elaborate and unneeded piece of new technology in the sport (but also awesome).

Japanese company Asahi Power Service's are behind the invention, and you can see it in action below.

It does come with a few question marks. Firstly, the battery only lasts for 20 minutes, it’s relatively loud while in operation, and weighs a hefty 11 pounds.

The designers are trying to bring the weight down to two pounds and boost the flying time to one hour, while also offering a rain umbrella version. Which would make a lot more sense in the UK.

TravisMathew to become the first brand to open a storefront at St Andrews
VIDEO: What are the Top 5 BEST GOLF CLUBS of all time?!
Drone
umbrella
Previous
Golfer gives up individual and team state titles after revealing own scorecard mistake
Next
Tiger Woods leads group of five golfers in Forbes Top 100 earners