Dustin Johnson wore adidas TOUR360 22 shoes at the Genesis Invitational featuring the number 99 and the colourway of the Edmonton Oilers who Wayne Gretzky played for. 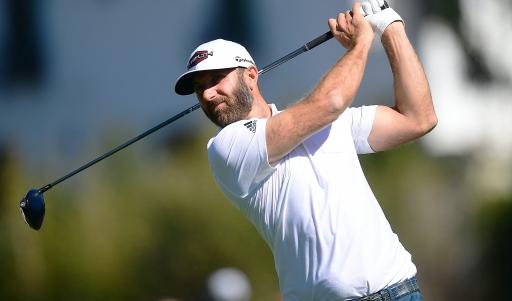 Dustin Johnson wore a special pair of adidas TOUR360 22 shoes on Thursday that paid tribute to Wayne Gretzky, the father of his fiancée Paulina.

In the first round of the Genesis Invitational, Johnson wore the shoes that donned the number 99, Gretzky's famous NHL number which has now been retired by every hockey team.

The shoe also includes a colourway and three stripes of the Edmonton Oilers, a team Gretzky won four Stanley Cups with, and also his very own 'DJ' logo.

Gretzky, who is regarded as the best ice hockey player of all time, is set to become Johnson's father-in-law this year when he and Paulina eventually tie the knot.

"Once Dustin and Wayne started playing together pretty frequently in pro-ams we always had it in our heads to create something unique that celebrated both of them," said Masun Denison, the global footwear director at adidas Golf.

DJ with a nod to The Great One. 9️⃣9️⃣ pic.twitter.com/1X0REBB3vZ

"The TOUR360 22 provides the perfect canvas for something like this and knowing how much hockey players love to play golf, we know this will be exciting for fans of both sports."

adidas have also created a special hat to go with this model. The hat uses the same colourway as the shoe and it features the '99' logo across the front.

Both the shoes and the hat will become available in a limited capacity on Friday, February 25 and can be found at adidas.com.

Unfortunately for Johnson, the shoes brought him no luck at Riviera Country Club. The former World No. 1 struggled to a 2-over-par 73 to finish in tied 89th place on the first day.

The two-time major champion suffered trouble on the 10th hole when he found the greenside bunker. He needed three shots to get out and made a damaging double bogey.

NEXT PAGE: DUSTIN JOHNSON HAS A SHOCKER IN THE SAND: "HAS HE GOT SOMEWHERE ELSE TO BE?"