Pat Perez had some damning words on Phil Mickelson on Thursday at the Genesis Invitational and can't understand why he has "hate" for the PGA Tour. 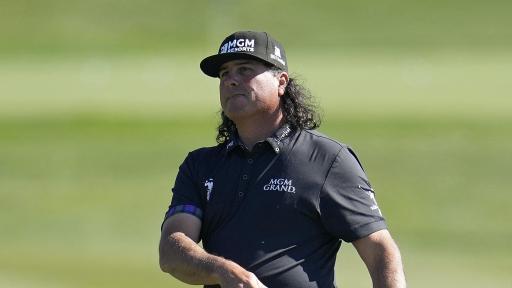 Pat Perez "doesn't care" what Phil Mickelson has to say about the Saudi golf league and the PGA Tour and said players won't follow him out the door to the Middle East.

Speaking bluntly at the Genesis Invitational, Perez declared that Lefty's concerns don't match his own views on the current situation concerning the Saudi golf league.

Perez' words put him alongside Rory McIlroy, Jon Rahm and Justin Thomas who have pledged their support for the PGA Tour and he questioned Mickelson's criticisms of the circuit and the commissioner Jay Monahan.

Mickelson used strong words in an interview with Alan Shipnuck and claimed that the Saudi golf league can be used as leverage to improve the PGA Tour.

"He's had an amazing career, he obviously thinks there's something else on the other side for him going down the line. If he gets it, great. He's made $800 million on the tour, I don't know what could be so bad about the tour. So I don't know.

"The PGA Tour's going to be around a long time. If 60 guys leave, there's going to be 60 more guys that come up and fill those spots. There's a line from here to Florida of guys who want to play on the PGA Tour."

Perez also mentioned with players such as McIlroy holding the line and not budging, this could hinder the progress and the success of the Saudi golf league.

The 45-year-old, who is a three-time PGA Tour winner himself, shot 1-under-par in the first round of the Genesis Invitational.

In an interview with The Stripe Show Podcast, tour player Kramer Hickok claimed that up to 17 players have already agreed to join the Saudi tour and it could be starting as early as June.

It is set to be sanctioned on the Asian Tour which has been the subject of a $200 million investment from LIV Golf Investments and the Public Investment Fund.

NEXT PAGE: PHIL MICKELSON: SAUDIS ARE "SCARY MOTHERF***ERS, WE KNOW THEY KILLED KHASHOGGI"