Electric trolleys are the preferred choice for global golfers

Golfers are turning to electric trolleys more than they ever have, according to research in a new report. 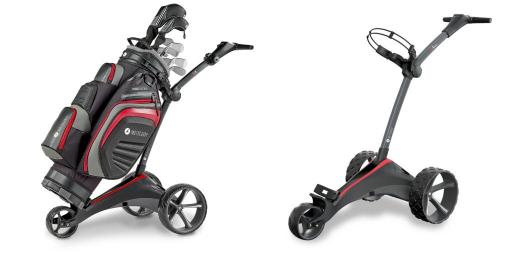 A growing number of avid golfers are likely to regard trolleys as the most satisfying method of getting around a golf course and an increasing number are choosig to use them more frequently, according to independent research in a new report.

Of the regular golfers surveyed in eight of the world’s top golf-playing nations, electric trolleys were used by up to two thirds of golfers in some markets. Nearly all golfers who use electric trolleys were satisfied with this method of transporting their clubs, and satisfaction with powered models was much higher (76 per cent very satisfied) than for golfers who used other methods (45 per cent very satisfied).

The 2022 Motocaddy Report, a 28-page document published this month by the world’s biggest-selling powered trolley brand, reveals that the global market for the product category is forecast to reach an estimated $200m (£147m) by 2030, representing a potential 44 per cent rise since 2020.

It also includes views about electric trolleys or ‘walking carts’ in the world’s leading golf playing countries – the USA, UK, Ireland, Germany, France, Australia, Japan & South Korea – where most golfers say being able to walk without strain is the biggest benefit, as well as having more energy and enjoyment for the experience.

UK golfers claim having more energy to hit the ball better as the main benefit of using an electric trolley (80 per cent) and the ability to play more golf is highlighted with 40 per cent saying trolley usage helps to alleviate the risk of injury.

Over a third (36 per cent) attribute having a more consistent swing thanks to using an electric trolley and 28% say they’re better prepared mentally on the course for each shot.

UK golfers value health and performance benefits more than golfers in other markets, with  90 per cent of electric trolley users appreciating not having to carry a bag. Nearly two-thirds (58 per cent) say using an electric trolley makes the game more enjoyable and they have more energy after the round, while half agree that it helps them maintain a good pace of play.

More UK golfers are using a Motocaddy electric trolley on the fairways than any other brand, with research indicating almost half (48%) use a Motocaddy model and 78 per cent perceive it as being ahead of its rivals as the brand for all golfers.

Motocaddy also came out on top in terms of being seen as environmentally conscious and forward thinking in the eyes of UK golfers, who rank second only to their Irish counterparts among those owning a powered golf trolley worldwide (65 per cent vs 66 per cent).

It’s also the strongest performing brand globally and the most considered brand among those interested in ownership.

“These findings are very positive and demonstrate how important electric trolleys are, but also the strong reputation that Motocaddy has built up among golfers in our home market as well as overseas,” said marketing director, Oliver Churcher.

“The report also highlights the dramatic progress of electric trolleys in recent years, in not only being able to transport clubs and navigate the course effortlessly, but also allow golfers to enjoy the game more and shoot better scores.”

“The fact that using an electric trolley delivers incredible health and performance benefits seems to be accepted by a large proportion of trolley users, as they see both the physical and mental value of not having to carry their clubs over long distances and tough terrains,” added Churcher.

“Interestingly, 42 per cent of UK golfers say they’ve played more golf in the past year when using an electric trolley, while more than a third (40%) expressed interest in buying another electric trolley in the future and 15% think it would help them enjoy the game more - which is obviously great news for us,” he added.

In addition to its number one status in the UK, Motocaddy is regarded as the most considered powered trolley brand in USA, Ireland and France, plus among the top three brands in Germany and Australia. Golfers in Asia are likely to prefer ride-on carts or human caddies.

On a global basis, most golfers using electric trolleys own rather than rent them and almost half are very likely to buy another model in the near future. More than 10 per cent of powered trolleys in France, Germany, Australia and the USA have owned them for less than a year.

Improved scoring and performance can often be attributed to the use of an electric trolley, with nearly half playing more often (46 per cent) and nearly a third playing better when using one. Equally importantly, electric trolleys are credited with helping golfers sustain the same amount of play when fatigue or injury might have otherwise stopped or reduced their playing time.

With 93 per cent of electric trolley owners being ‘very or quite’ satisfied with their purchase, they are also likely to believe that an electric trolley represents a better investment in their game than buying a new set of clubs. This is highlighted especially in America, where just under half (49 per cent) of powered trolley users wish they had switched to an electric walking cart sooner.

For more information on The 2022 Motocaddy Report and about Motocaddy trolleys, bags, batteries and accessories, please visit www.motocaddy.com or follow @MotocaddyGolf.

*The research was conducted among British men and women golfers in July and August 2021 by leading sports research company Sports Marketing Surveys, with the aim of understanding how, when and why different groups use electric golf trolleys to convey their clubs around the course.