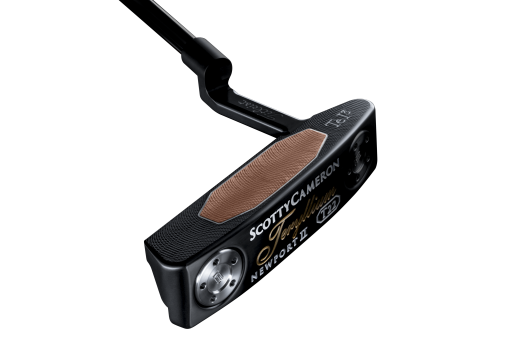 Twenty-two years after the emergence of his original Teryllium-inserted, major-winning TeI3 designs, Scotty Cameron has reimagined and announced the limited release of three new putter models built under the 'T22' moniker.

Precision milled in the United States from 303 stainless steel, and given a tactical matte black finish that brings out Scotty’s unmistakable 'domino pattern' in the back cavity, the new T22 putters are designed to the modern specifications demanded by today’s dedicated golfers.

Incorporating decades of design refinements, Scotty built the Teryllium T22 Newport 2 in the spirit of the early models – with the soft feel of his Teryllium alloy inlay, but with the modern shape and sole balancing precision of a modern Newport 2 Tour model milled from 303 stainless steel with interchangeable sole weights and a flatter topline.

The new Teryllium T22 Fastback 1.5 incorporates a Tour-preferred mini-slant neck, improved four-way sole balancing for a square setup and a thinner topline similar to the Select line’s Fastback model, while maintaining the visual aesthetics of early Teryllium putters – with its familiar black, white and gold color scheme and “domino pattern” in the putter’s back cavity.

"There’s nothing quite like the feel of Teryllium," said Scotty Cameron.

"It’s the number one material request I get from players. And, as we’ve seen multiple Majors won over the past few seasons with a Teryllium-inserted putter, it’s a great time to celebrate this legendary design.

"T22 gave us the opportunity to take everything we’ve learned over the past two decades and refine the entire look, feel and performance. Like a modern day muscle car, everything looks original at first glance, but each component is brand new. Better milling. Better materials. Better construction. They’re made to game."