Hybrid vs Driving Iron Golf Test! Which club is right for your game? 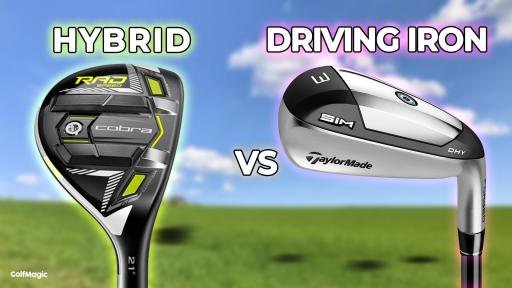 Driving irons are becoming more popular in both professional and amateur golf and there are some fantastic golf clubs that suit every player's needs and desires.

Although the SIM DHY is a narrow-faced driving iron, it has a lot of offset and it is forgiving. It is a 19-degree club that has a sleek design.

The Cobra Radspeed is 21 degrees and has a much deeper face than the TaylorMade club. It almost falls into the category of a fairway wood.

RELATED: SEAN FOLEY WAS MOCKED FOR USING TRACKMAN, NOW HE KEEPS TRIPPING OVER THEM

With the offset that the TaylorMade SIM DHY has now, this club is evidence that driving irons are potentially gravitating towards the appearance of hybrids.

The SIM DHY may be forgiving, but it is still suited to players who are more experienced and confident with striking the ball out of the middle of the clubface.

The Cobra Radspeed hybrid has a higher launch angle, produces higher spin and is easier to hit. It is part of a very popular range and model of club, if the Cobra Radspeed driver is anything to go by.

Alex advises that hybrids are better suited to players with higher handicaps. Hybrids are more reliable in both the fairway and the rough and they are better used to get the ball off the ground.

They are more forgiving with off-centre hits. Both the Cobra Radspeed hybrid and the TaylorMade SIM DHY would be great additions to the bag.

Alex also brings the TaylorMade P790 into the comparison, which really is only suited to tour players with its sleek, straight-edged clubface.

The TaylorMade SIM DHY is certainly more forgiving than the P790 2-iron and this certainly shouldn't be ruled out by mid-handicappers either.

NEXT PAGE: "I WAS TOO ARROGANT": TOP GOLF INSTRUCTOR SEAN FOLEY ON TIME WITH TIGER WOODS