Sean Foley was mocked for using TrackMan, now he keeps TRIPPING over them

The famed golf coach has been speaking to Claude Harmon about his 11-year association with Justin Rose. 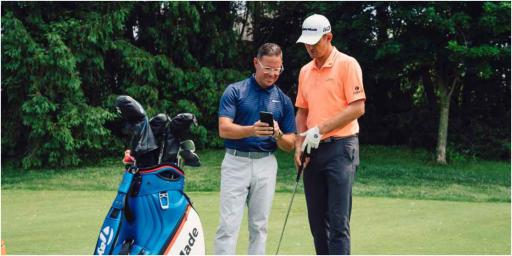 Golf instructor Sean Foley has revealed he was mocked when he first used TrackMan and now he trips up on them every week.

The famed coach knows a thing or two about golf and throughout his career has worked with some of the game's biggest stars.

A four-year stint with Tiger Woods was followed by an 11-year association with Justin Rose where they enjoyed glittering success.

Rose has not won on the PGA Tour since the 2019 Farmers Insurance Open and was looked over by Padraig Harrington for the European Ryder Cup team.

MORE: MATTHEW WOLFF OPENS UP ABOUT THE BLACK DOG

This week Foley, 47, joined the Off The Course with Claude Harmon podcast to discuss his association with Woods, Rose and many other subjects.

His parting with Rose was amicable as the pandemic forced them to spend time apart, with the Englishman claiming he wanted to take ownership of his game.

That is something Foley wanted for Rose, the Englishman was later quoted as saying.

Foley told the podcast about their split: "Rosey's like my brother, um, I been doing this long enough. I know how it goes. I don't take any of it personally.

"You can't, just 'cause it's really not about you at that moment. And pretty much, 80 per cent of my great memories come from him and I on the PGA Tour and we really, we really pushed for having a team around a player...we pioneered a whole lot of things."

Their partnership saw Rose win all 10 of his PGA Tour titles and capture his lone major championship at the 2013 U.S. Open at Merion.

Technology has obviously played a huge part in the game over the last 20 years.

One of those is the development of launch monitors.

Rose was one of the first to use TrackMan with Foley to see if the numbers matched up with what they were working on.

"I remember us getting made fun of for all of our TrackMan numbers...and now I trip 12 times a week over someone's orange box," Foley said.

"So yeah, uh, like I said man I probably been fired about 100 times. The first one really hurt, the second hurt less, the third one hurt less... it still hurts but it's like a day and not a month."

You can listen to the podcast here.

NEXT PAGE: WHAT IS IT LIKE TO PLAY WITH TIGER WOODS?