I Got Custom Fit For a BRAND NEW TaylorMade Stealth Driver!

Alex from GolfMagic travelled up to Scottsdale Golf in the North of England to get custom fit for his own TaylorMade Stealth driver. 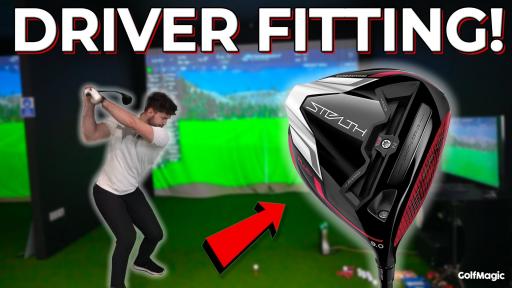 Have you ever had a custom fit for your own driver or set of irons? How helpful was this session and did it improve your game?

Alex from GolfMagic travelled up to Scottsdale Golf in the North of England to get fitted for his own TaylorMade Stealth driver by PGA professional Rob Braithwaite.

First of all, Rob asks Alex which type of course he regularly plays because his choice of driver needs to suit hilly and wet inland courses, as opposed to links courses.

Alex wants a driver with high launch and low spin, so now Rob must think of which shaft and head are appropriate for Alex's request.

They go through different types of shafts in the session and they begin with a Project X HZRDUS Smoke Blue which is a stock shaft from TaylorMade.

Related: WATCH: Golfer plays his shot in front of a wedding party

This shaft suits faster swing speeds. Rob also changes the head to a TaylorMade Stealth Plus head with eight degrees of loft. This head usually plays with a fade bias.

Rob then changed the shaft for Alex to a Graphite Design Tour AD DI 7X shaft which was a similar weight to the first one, but this one matched the high launch and low spin profile.

Having seen Alex hit drivers consistently around the 320-yard mark, Rob made one final shaft change to a Fujikura Ventus Black 6X shaft, which is one of the most popular shafts on the PGA Tour.

After his hitting session, Alex was shown his spin rate, distance and launch by each shaft. This is essentially what happens when you get fitted for your new driver.

Alex was then shown the workshop at Scottsdale Golf and the process of building a driver or a set of irons. Rob told us that it would usually take an hour to construct a self-made driver and up to two and half hours to make a set of irons.

Next Page: Paul McGinley on Phil Mickelson: "He's a big boy, he can take care of himself"