Check out Tiger Woods' clubs and more in the TaylorMade TOUR TRUCK!

Alex from GolfMagic was able to look through the TaylorMade Tour truck while on a special visit to Scottsdale Golf in the North of England. 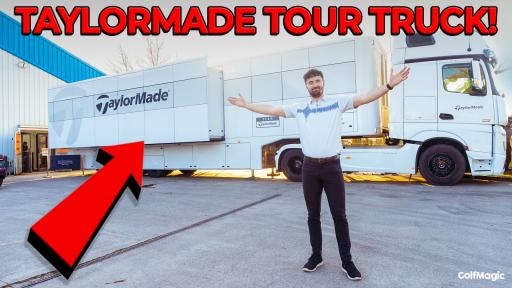 Have you ever wondered what it is like on the inside of the TaylorMade Tour truck that travels around the world to events on the PGA Tour and the DP World Tour?

Alex from GolfMagic visited Scottsdale Golf and went inside the TaylorMade truck where Adam, the Experiential Technician, showed him the ropes.

Firstly, Adam showed us the draws that contained the heads of the new TaylorMade Stealth hybrids, followed by the new and impressive driver heads.

We then moved on to the fairway woods which, as you can see in the review video below, are divided by degrees. Adam then moves on to the shafts.

He showed Alex the shafts that 15-time major champion Tiger Woods uses in his driver and fairway woods, a privilege to look at and hold indeed.

Adam shows us the most popular shafts on the PGA Tour which are the Fujikura Ventus VelaCore black, blue and red shafts. They all offer different levels of spin and launch.

Adam and Alex then moved on to the MG3 and Hi-Toe wedge heads. Adam outlines the importance of getting custom-fitted for your wedges in today's game.

Hi-Toe wedges have become very popular on the PGA Tour. These new wedges have more grooves which give golfers optimum spin across the clubface

Adam reveals that Rory McIlroy changes his wedges more than any other player, altering them every two or three weeks. This is in contrast to Jason Day when he used to change his TaylorMade wedges every three or four months.

We then have a peak in the draw that contains the MC and MB irons, which are most suited to good amateurs and tour golfers.

Adam moved on to golf balls and lets us into a ritual that happens at TaylorMade. If a staff player wins, they get to choose a number of a ball, such as when Dustin Johnson chose to put 1 on his own ball.

Alex takes us on a fascinating tour on the exclusive vehicle. Let us know what you think of our video across all of our social media channels.