Thomas and Koepka both make big driver changes, and both find themselves in Phoenix Open contention 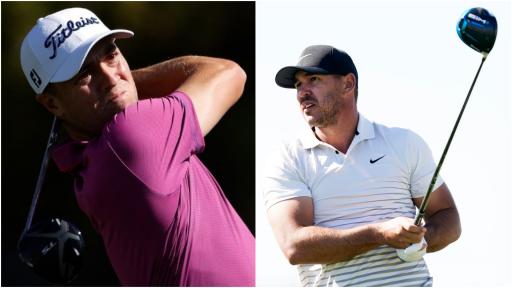 It's been a week of beneficial driver changes for three of the world's best golfers on the European Tour and PGA Tour so far this week.

Dustin Johnson switched back into the original TaylorMade SIM driver en route to winning the Saudi International earlier today, and we've also noticed Brooks Koepka and Justin Thomas have switched up their drivers at the Phoenix Open this week.

Koepka, who has been heavily linked with a permanent move to Cleveland and Srixon in recent weeks, has swapped his TaylorMade M5 driver for the brand new TaylorMade SIM2 driver.

It's been a move that has paid dividends so far for Koepka with him progressing nicely to 13-under par and just five strokes off the pace heading into the final round.

Koepka's driving has been averaging 319 yards off the tee so far this week, and is finding 60% of the fairways. He certainly doesn't appear as frustrated with his driver as last week, anyway. WATCH Koepka with a crazy driver shaft bend around his back at Torrey Pines:

Thomas has also mixed things up at the top end of his bag by replacing the brand new Titleist TSi3 driver with his trusty old faithful Titleist TS3 driver.

RELATED: JT ONLY HAS HIMSELF TO BLAME FOR LOSING RALPH LAUREN

The American is one shot better off than Koepka after 54 holes of the Phoenix Open at 14-under par in a tie for fifth.

Thomas is averaging a similar distance to Koepka at 315 yards off the tee, and has found a few more fairways than his compatriot with 64%.

NEXT PAGE: DUSTIN JOHNSON REVERTS BACK TO THE ORIGINAL SIM DRIVER EN ROUTE TO LANDING THE SAUDI INTERNATIONAL