PING announced the release of their new i59 irons last week, so Alex from GolfMagic wanted to compare them to the Srixon ZX7 irons. 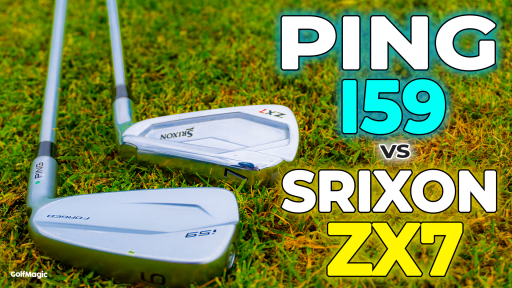 GolfMagic reviewed the Srizon ZX7 irons last year and they excelled in feel and comfort when you took the club and addressed the ball.

Both the PING i59 and Srixon ZX7 irons have a similar design, but the i59 irons have a hydropearl finish with a smaller head and a smaller sweet spot.

This would suggest that the PING clubs are more suited to tour players and low handicappers, but compared to other bladed clubs, they are still very forgiving.

Alex took both irons to Kings Golf Studio in East Grinstead to test their performances and the Srixon ZX7 irons have maintained their superb comfort and feel.

In the studio, the PING i59 irons provided much better dispersion compared to the ZX7 irons, but the results were flipped when Alex took the clubs to Mannings Heath Golf and Wine Estate.

With its slightly larger face and increased forgiveness, the Srixon ZX7 irons produced a better dispersion on the golf course, which is why these clubs may suit a range of handicaps and abilities.

The Srixon ZX7 irons are completely forged, whereas the PING i59 irons are not completely forged. They are less offset and much like many bladed irons, they have a smaller clubface which will need greater precision to find the sweet spot.

As the Srixon ZX7 irons came out last year, they are far cheaper and more affordable than the PING i59 irons which could potentially cost up to £1,400 for six clubs.

Budget is certainly a factor for you to consider when buying irons, which may mean you will side with the Srizon ZX7 irons but if you invest in the new PING i59 irons, you will not be disappointed.

NEXT PAGE: RYDER CUP 2021: OUR PREDICTED SIDE FOR TEAM EUROPE