Alex compared the new TaylorMade P790's to the Nike Vapor Pro Combo irons from 2014 to discover if it is worth splashing out on a brand new set of clubs. 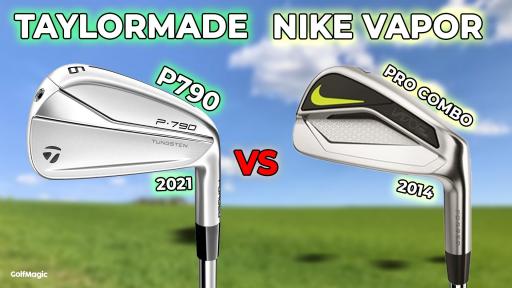 There is no question that when new irons are brought out by the biggest manufacturers in golf, these clubs will bring superb qualities and features that will enhance your game.

But does it get to a point where there is only so much a company can do to enhance a new set of irons? Is there a limit to which we can revert back to an old set of irons that will perform as well?

Alex from GolfMagic took this into consideration when he took the TaylorMade P790 irons and the Nike Vapor Pro Combo irons to Kings Golf Studio in East Grinstead.

Nike no longer make clubs, but the Vapor Pro Combo irons from 2014 are a very aesthetically-pleasing set with the yellow tick on the head.

The P790's are made with Speedfoam Air which makes the sweet spot larger. In this way, the club is more forgiving and it does not punish off-centre hits.

A clear difference between both irons is the loft of each club. The TaylorMade P790's 7-iron is 30.5 degrees whereas the Nike Vapor Pro Combo 7-iron is 34 degrees.

TaylorMade have emphasised longer distances as well as forgiveness with this iron. The Nike set will be less forgiving with off-centre hits.

They are both forged irons so in terms of feel, they should both excel in this department. But the technology used in the TaylorMade P790 iron is what sets these clubs apart.

The Speedfoam Air and the optimized CG in the clubface makes this set of irons suitable for all golfers. They deliver more forgiveness and more distance than the Nike set, which is seven years old.

There is a clear improvement and progression year on year with golf irons and the TaylorMade P790's are just another example of this.

Nonetheless, the Nike Vapor Pro Combo set was meant for providing high spin and solid ball-striking and you would not be far behind your playing partners if you had these in your bag.

But as you can see in the video, the stats and data do set them apart and if a tour professional was to test both of these irons, the differences would be clear.

NEXT PAGE: "YOU GET A CAR!": THREE LPGA TOUR PLAYERS MAKE HOLE-IN-ONES TO WIN A LAMBORGHINI