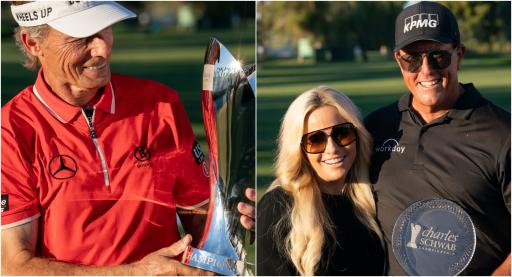 Phil Mickelson made history by winning the Charles Schwab Cup Championship at Phoenix Country Club to pick up his fourth win on the PGA Tour Champions.

He joined Jack Nicklaus as the only players to win four of their first six events on the PGA Tour Champions. He birdied three of his last four holes to finish one shot ahead of Steven Alker.

The timeless Bernhard Langer finished in outright 17th place which was enough for him to secure the season-long points list award, the Charles Schwab Cup, for the sixth time in his career.

The German struggled with back pain all week in Arizona. He finished on 12-under-par after four rounds and waited to see if Jim Furyk finished in a tie for third.

RELATED: "IF ANYBODY NEEDS ME I'LL BE ON MY COUCH": JUSTIN THOMAS SHARES HIS HAPPY PLACE

Furyk either needed this or a win if he was to take the season-long award from Langer's grasp, but he could only shoot a level-par 71, leaving him in tied fifth place on 16-under-par.

In the third round on Saturday, Langer beat his age on the golf course for the first time by shooting 63. He couldn't maintain this form into Sunday, but a 2-under-par 69 was good enough for the required finish to take his fifth Charles Schwab Cup in the last seven years.

In terms of the Charles Schwab Cup Championship, Mickelson began the final round three shots behind Furyk, but he took the lead with birdies at the 14th and 15th holes.

Lefty finished with a bogey-free round of 65 to finish on 19-under-par. Runner-up Alker has now completed his first PGA Tour Champions season and what a finish it was.

RELATED: "YOU GET A CAR!": THREE LPGA TOUR PLAYERS MAKE HOLE-IN-ONES TO WIN A LAMBORGHINI

He had no status in July and after qualifying for the Boeing Classic in August, he went from strength to strength with top-10 finishes in six of his next seven events and then a win in the TimberTech Championship last weekend.

2011 Open champion Darren Clarke finished in tied third place with David Toms on 17-under-par and Brandt Jobe was in tied fifth with Furyk.