The 26-year-old had a putt to win in regulation and another from the same distance to extend the playoff but missed them both... 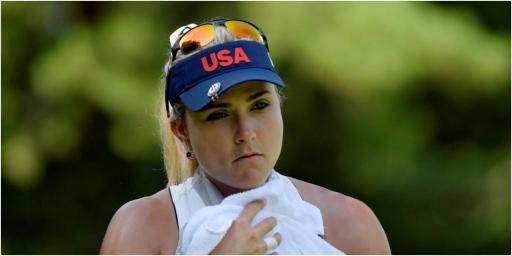 Lexi Thompson stumbled twice at the Pelican Women's Championship on Sunday as Nelly Korda took command of the player of the year race on an evening of high drama on the LPGA Tour.

Korda uncharacteristically faltered at 17 when she was leading by two shots. She tugged her wedge approach, chunked the third straight into the bunker and duly three-whacked. A triple bogey was surely the death knell for her chances. "Even though I say I think I lost hope, I will never give up. I'll go down fighting," Korda, 23, told the media afterwards, with a beaming smile.

But Thompson was not one to smile. Of course, gracious in defeat as ever. But this tournament was handed to her on a plate. And she couldn't get the job done. She needed par up 18 at the Pelican Golf Club to seal the win and claim her 12th win on the LPGA Tour since she turned professional in 2011. A tricky lag putt at the 18th was low and left her a nervy one from about four feet. That one was pushed. Korda rammed her putt straight down the middle from 20 feet and gracefully fist-pumped.

MORE: THREE LAMBOS GIVEN AWAY ON LPGA TOUR

MORE: BRYSON DECHAMBEAU SENDS ONE TO THE MOON

The playoff birdie that clinched win No. 4 of the season, No. 7 of @NellyKorda's career! pic.twitter.com/08mHoruUL1

It led to a four-way playoff which Korda duly won. Her 7-iron approach was nearly identical to the one she played in regulation and she made the putt. Again. Of course she did. Meanwhile Lydia Ko missed the green, as did Kim Sei Young. Thompson superbly played her approach off the bank in the middle of the green and left her the same kind of putt she had for the win. Now she had this one to extend the playoff. The first one was low. This one was high. Cue elation. Cue Jessica Korda running down the fairway to congratulate her sister.

Thompson is no stranger to crushing defeats. After all, she surrendered a five-stroke lead in the final round of the U.S.Women's Open earlier this year. At the start of the week she was praised for her putting. But in the end it was the flat-stick that let her down again. Fans reacted with a mixture of shock, sympathy and tough love for the now 26-year-old.

Unfortunate that Lexi could not make a 4 ft putt to saver her life. I could see it coming both on 18 and playoff; she just cannot make short putts under that type of pressure.

Lexi - tee to green absolutely awesome. Putting under pressure - like a mid handicapper. Such a shame she hasn’t found something that works for her.