Alex from GolfMagic compared the new TaylorMade Stealth driver to the old TaylorMade SIM2 driver. Should you look to replace you old driver straight away? 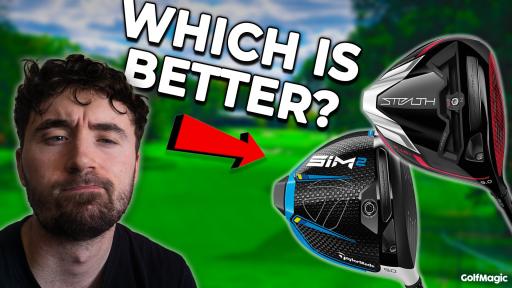 Alex from GolfMagic made an interesting comparison in design and data between the new TaylorMade Stealth driver and the TaylorMade SIM2.

The Stealth driver has created a new era of the carbonwood. There are 60 layers of carbon in the face that increases ball speed and relief of weight.

With this new club, TaylorMade have guaranteed gains in ball speed and forgiveness. The design of it is very different to previous models.

The Stealth driver has a red face with a black head, while the old TaylorMade SIM2 driver used a predominantly light blue colourway with a forged aluminium feature.

The TaylorMade Stealth has proven to be popular with PGA Tour stars such as Tiger Woods, Dustin Johnson and Collin Morikawa who have put them straight into play.

The new driver has a 10% larger face than the SIM2 driver. This is a significant increase and with more club to hit the ball, it instils confidence.

Even with shots out of the toe or the heel, Alex shows that the Stealth still rewards you with good distances and good shots down the fairway.

In terms of the SIM2, there is still a large degree of forgiveness. In this way, you should consider if it is worth paying £469 for the Stealth which has similar levels of forgiveness.

Both drivers produce impressive ball speeds, distances and spin rates, however, the Stealth does produce better numbers in each of these areas.

Both the Stealth and the SIM2 drivers are very impressive. If you already own the SIM2, there would be no need to rush into purchasing the Stealth driver without consideration.