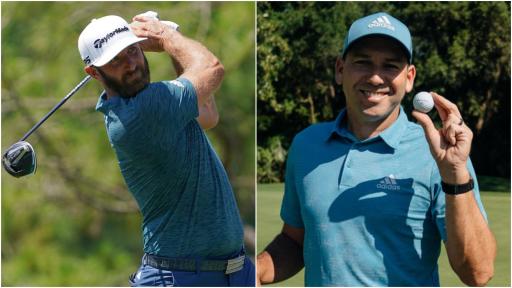 Dustin Johnson and Sergio Garcia have made some last-minute equipment changes ahead of this week's US PGA Championship.

According to GolfWRX, Johnson, 36, has decided to change the shaft in his TaylorMade SIM2 Max driver (10.5 degrees) at Kiawah Island from a Fujikura Speeder 661 X prototype to an LA Golf prototype.

The news comes as something of a surprise ahead of golf's second major of the year, simply because the World No.1 has used the Fujikura Speeder driver shaft for a while now and he has made it clear in past interviews that he hates to tinker too much with his bag.

"LA Golf was created to partner with the world’s best golfers to grow the game," reads a statement on the LA Golf website.

"We design, develop, and locally manufacture performance-driven and technologically advanced shafts in partnership with some of the top players in the game.

"Whether you’re playing in tournaments or a weekend warrior, our shafts allow you to be more athletic and ultimately swing harder."

Johnson produced the biggest laughs so far this week in the media centre when he was questioned by a reporter as to which putter he has in the bag at Kiawah Island.

The American's response was simply: "It's a TaylorMade". What about the model, DJ? "Erm, I don't know. It's silver."

WATCH: DUSTIN JOHNSON ADMITS HE HASN'T A CLUE WHAT HIS TAYLORMADE PUTTER IS CALLED!

Johnson is making his return to action on Tour for the first time since a disappointing tie for 48th at the Valspar Championship at the start of May.

Elsewhere in equipment news ahead of the US PGA Championship, Garcia this week announced his return to TaylorMade Golf, a company he had previously spent 15 years with through to 2018.

The Spaniard moved to Callaway for two years and then left to become a free agent, but the 2017 Masters champion is now back with the brand that saw him play his greatest golf.

Garcia, 41, is back with a number of new TaylorMade clubs in his bag, but the biggest surprise this week is his switch in TaylorMade golf balls from the TP5x that he was already playing to a TP5 this week.

This change will simply be a spin-related decision at Kiawah Island, which is the longest golf course ever in major championship history measuring just shy of 7,900 yards!

The biggest difference between the TP5 and TP5X is the softness of the exterior. The TP5 golf ball has a soft cast urethane cover, and the TP5X has a slightly stiffer cast urethane cover. The TP5X's firmer cover allows for more speed, a higher trajectory and less spin.

TaylorMade's TP5 ball, which is favoured on the course by us here at GolfMagic, is the brand's softest Tour ball with the most spin and highest performance around the greens.

NEXT PAGE: BRYSON DECHAMBEAU LOOKING TO "UNLEASH THE BEAST" AT THE US PGA