DP World Tour pro Dean Burmester benefitted from this golf rule that Tiger Woods made famous at the Phoenix Open in 1999. 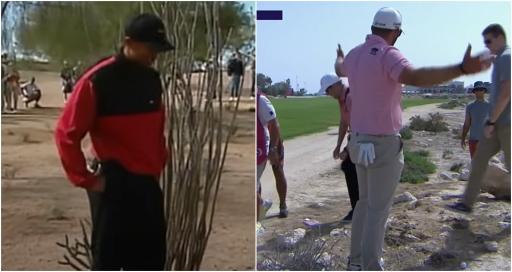 Cast your mind back to the 1999 Phoenix Open and you may remember this classic Tiger Woods moment.

His tee shot had occupied itself behind a massive boulder. Technically, it was a loose impediment, and he was entitled to move it.

But at the time he was Tiger Woods. He had already won his first Masters and the golf world was in absolute awe of him.

Instead of Woods getting his hands dirty a group of willing patrons in the crowd helped move the rock. Woods then shook their hands.

DP World Tour pro Dean Burmester found himself in a remarkably similar situation during Friday's second round of the Qatar Masters.

South Africa's Burmester, 32, called on anyone willing to help move the loose impediment despite the fact it weighed three tonnes.

"Mind your back muscles," the commentator said. "And your toes". After a good old fashioned heave ho, they had success.

"Amazing guys," Burmester said on the par-5 ninth hole at Doha Golf Club. "Thank you so much."

Burmester splashed his shot out of the waste area and managed to escape the hole with a solid par when it could have been much worse.

After the fans moved the boulder for Woods, he went on to make a birdie. Of course he did.

What the Rules of Golf say about loose impediments....

Under Rule 15.1a, it points out that that loose impediments come in different shapes and sizes.

The means by which they are moved are not limited, though it says that the removal time must not be unreasonable.

There are two exceptions to this Rule.

1. Removing a loose impediment where a ball must be replaced

2. Restrictions on deliberately removing a loose impediment to affect a ball in motion.