Sik Golf Putter Fitting - Why should you get fitted for your putter?

Alex from GolfMagic went down to Silvermere Golf Club to get fitted for a new Sik Golf putter. 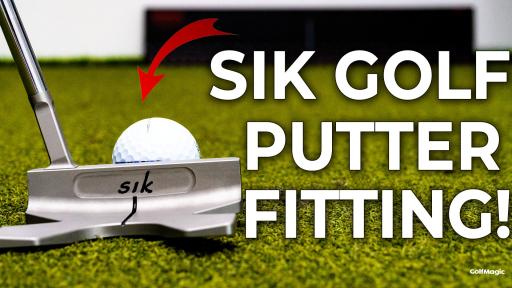 Sik Golf have revolutionised the way that putters are now made with Descending Loft Technology, helping both professional and amateur golfers produce consistent putting strokes.

This was just one of the many things that PGA Professional Colin Iddon explained to Alex from GolfMagic when he went down to Silvermere Golf Club for a Sik Golf putter fitting.

You may think that there is only so much that can be explained in putting, compared with a fitting for irons or a driver, but you can access a lot of data that shows where you can improve.

At Silvermere, Alex and Colin used Quintic which is essentially the Trackman of putter fitting. The tracker records your ball roll and analyses the cut spin, hook spin and skid of the ball's path.

This data helps the golfer to discover what he needs to change in his putting stroke, but primarily, what needs to be adjusted in the putter for the fitting.

Alex tried an orthodox Sik Golf Flo Putter and the controversial Armlock Putter, which Bryson DeChambeau uses, to see which one produced the best results for him.

Both putters are made with Descending Loft Technology, which ingrains four different lofts into the face of the putter. This helps your connection with the ball so that you get a true and consistent roll.

Quintic identifies three different stages of a putt: the launch, which is when the ball comes off the clubface. The bounce or skid, which is the ball's reaction to being hit and the roll, which is its progress towards the hole.

When using Quintic technology, it records your ball rolling and gives visual evidence of how your ball spins and skids after you have hit it.

After testing two different putters, Alex decided that the Sik Golf Flo Putter at 35 inches was the most suitable for him, based on his putting stroke and launch angle.

If you have never experienced how a putter fitting can benefit your game, then GolfMagic would definitely consider that you do it as soon as possible.