Alex compared the TaylorMade Stealth Plus and the Cobra King LTDx LS drivers and the verdict was made based on forgiveness and feel. 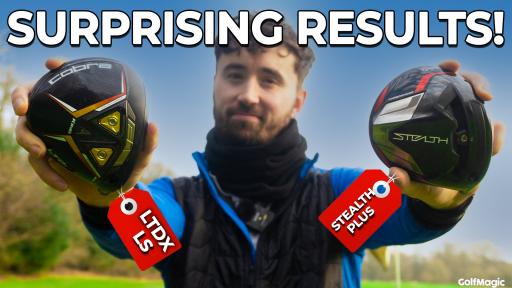 The TaylorMade Stealth Plus and the Cobra King LTDx LS drivers are two of the headline clubs of 2022 and they are both extremely impressive.

They are both low-spinning drivers with a fade bias and they are suited to players with low handicaps or even professional golfers on the PGA Tour.

The Stealth Plus driver has a new, red face with 60 layers of carbon which is a new feature for 2022. This is designed to increase ball speed off the clubface.

The Cobra King LTDx LS driver has external weighting and H.O.T Face technology. This produces a high MOI and more forgiveness in general.

As you can see by Alex's numbers at the golf studio at Silvermere Golf Club, both drivers averaged around 320 yards and 180 mph in ball speed too.

Alex found that the Stealth Plus was less forgiving than the Cobra driver, despite its revolutionary carbon face. This may come as a surprise to some viewers.

The Cobra King LTDx LS is more forgiving which is what the popular brand seemed to focus on when they marketed the product, as opposed to huge distance or ball speeds.

However, the TaylorMade driver gave Alex positive feedback with a lower, curving ball flight. Alex couldn't feel the off-centre hits as much as the Cobra driver.

The deciding factors were forgiveness and feel and Alex felt that the Stealth Plus has an incredible feel across the face, but the new Cobra King driver is more forgiving.