TaylorMade Stealth vs Cobra LTDx | Which Irons Will IMPROVE Your Game?

Alex from GolfMagic compared the TaylorMade Stealth irons to the Cobra LTDx irons to asses their performance and suitability for different golfers. 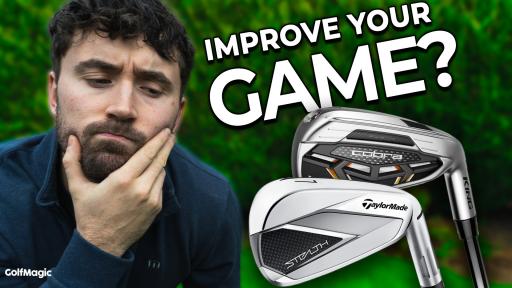 The TaylorMade Stealth irons and the Cobra LTDx irons are both perfect for game improvement and suit a large range of amateur golfers.

The Cobra LTDx irons (£799) have a slightly larger and thicker sole. They have a bigger head in general, which make the TaylorMade Stealth irons (£854) look more pleasing on the shelf.

The Cobra irons have stronger lofts. The LTDx 6-iron is 23.5 degrees, whereas the Stealth irons are 24 degrees.

You could argue that the TaylorMade irons are more suited to combo sets. You can combine these irons with previous models such as the SIM2's.

As for forgiveness, the Cobra LTDx's still produce good results with off-centre hits. When Alex doesn't find the middle of the clubface, he can still find the green.

The spin consistency across the face is very good. They deliver great distances, impressive ball speeds and clubhead speeds.

Although they are forgiving, the Cobra LTDx irons may suit higher handicappers than the TaylorMade clubs with their strong lofts and thick heads.

The launch data and flight is similar to the Cobra clubs, but they have a higher spin rate. The Stealth irons deliver on all fronts too and have more workability with a thinner clubhead.

Both the LTDx and Stealth irons are fantastic for game improvement, but the TaylorMade irons arguably suit a larger range of handicappers and can help you get down to a low single-figure mark.

They are superior irons that you can't go wrong with. They have similar price tags which are very reasonable. Take a look at both iron sets as it is very difficult to separate their quality.

NEXT PAGE: PGA TOUR: HOW MUCH DID EACH PLAYER WIN AT THE FARMERS INSURANCE OPEN?