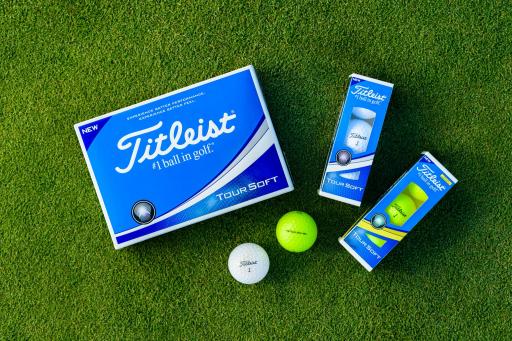 Titleist has launched its new Tour Soft golf ball, designed to offer both a soft feel and distance, and Velocity golf ball,

The brand say the Tour Soft is the softest ball in the category, combining the largest ever core in a Titleist ball with an ultra-thin cover for great feel, speed and control.

“We knew based on breakthroughs being made in R&D that there was an opportunity to deliver a brand new high-performance golf ball that would lead the category in terms of soft compression feel,” said Michael Mahoney, VP Titleist Golf Ball Marketing.

“ Ultimately, because of our exhaustive and iterative prototyping process, we were able to deliver everything we wanted in Tour Soft – and more. It’s not only the softest ball in the category, it’s better and longer than Chrome Soft, TP5 and Tour B RXS.”

- Thin 4CE grafted cover made with TCU Process Technology for control. Innovations in Titleist’s ball plant allowed them to mould a thin, soft, uniform cover. The cover on this ball is as thin as urethane covered balls on the market.

It replaces the NXT Tour and NXT Tour S golf balls. Launching one ball that “does it all” keeps it simple for consumers, as market research showed Titleist some golfers were confused by the NXT Tour and Tour S balls.

“There was a point in the development process where we knew we could make Tour Soft in small batches in R&D but faced some challenges in terms of implementing the new TCU Process technology into our mass manufacturing environment at Ball Plant 2.

“The ability for our teams to collaborate and innovate on a daily basis was critical in bringing this product to market and delivering the performance, consistency and quality that golfers expect from a Titleist.”

Titlesit believe this ball is aimed at a player that wants high levels of performance, but does not require premium performance, which would come in the form of the ProV1 ProV1x.

The Titleist Velocity ball are built for maximum distance, and come in a four colours.

Designed for golfers that play primarily for fun, have an eye on their bank balance and are probably higher handicappers, the Velocity soft, high-speed core and Titleist’s fastest ever cover.

Aerodynamics promote a high launch and low spin off the tee, which is a recipe for distance.

“Everything we do with Velocity is to generate speed and distance. When we spoke to Velocity golfers at the beginning of the development process, they told us they wanted even more distance, especially off the tee,” said Mahoney.

“Our R&D team responded with new core technology and the fastest cover of any Titleist golf ball on the market to give them that added advantage.”

- Spherically-tiled 328 tetrahedral dimple design provides peak aerodynamic performance, for a high flight that will come down steep for a soft landing.

“We’ve seen an increasing preference among golfers in general to play products that they truly identify with and colour is a big part of that. We’re confident these new colour options  combined with the improved performance of Velocity will only make the game more enjoyable for these golfers,” said Fish.