Alex from GolfMagic compared the Callaway Rogue ST MAX and the Cobra LTDx drivers to discover which one performed on all fronts. 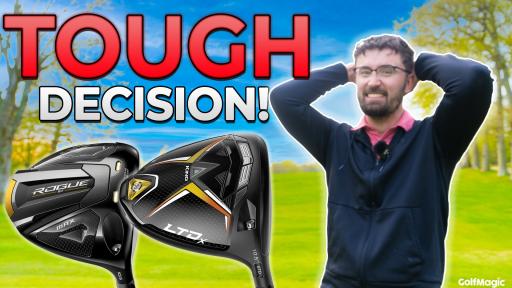 The Callaway Rogue ST MAX and the Cobra LTDx drivers are two flagship clubs that have been released in 2022 and they both have a lot of qualities.

The Callaway club has been very successful in 2022. The tungsten weighting, ball speed consistency and results across the clubface have been very impressive.

The Rogue ST MAX has an elongated face and an attractive colour scheme. The gold and matte black finish look very good and it is a very pleasing driver to look at.

In terms of the Cobra LTDx club, the head is much smaller and it is more compact. The finish is a bit more glossy and it comes with the removable weighting feature.

The Callaway driver has a draw bias. The face is slightly closed so if you have a neutral swing path, your shot dispersion will edge to the left. With the Cobra LTDx, there is no angle bias.

At the studio at Silvermere Golf Club, data showed that the Callaway driver had more spin and a higher launch which would suggest it is more forgiving.

As well as these statistics, feel is another important factor we must consider. The Callaway driver has a muted noise and in Alex's opinion, it feels far better with off-centre strikes.

Despite having similar ball speeds, the Cobra LTDx driver is more explosive and could favour better golfers who want to prioritise distance over forgiveness.

The Callaway Rogue ST MAX driver costs £479.00 whereas the Cobra LTDx driver is £399.00. This may sway you towards Cobra as £80 is a significant price gap.

Next Page: Pebble Beach will host four future US Opens and first-ever US Women's Open