Tom Watson's answer to the equipment roll back debate is a bigger golf ball. 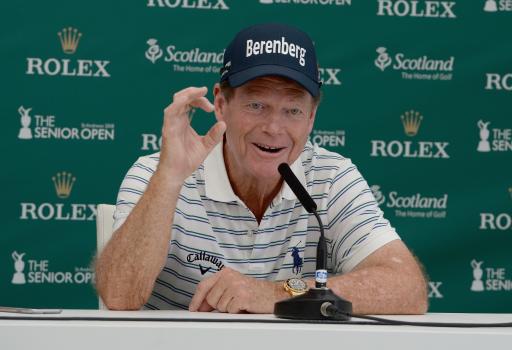 Tom Watson’s answer to the golf equipment roll back debate is a bigger golf ball.

The eight-time major champion pointed to the change of ball around the turn of the millennium as a major reason the world of golf is having the distance debate.

“The biggest change in the (professional) game has been the golf ball,” the 68-year-old said.

“You can say players swing faster because they work out and they are stronger. Yeah, that's an element. But when they changed the golf ball in 2001 it was 29 yards different.

“Let’s say you hit drives on 14 holes, that's over 400 extra yards. Add the extra distance you get with the irons and that’s maybe another 100 yards. So the course is 500 yards shorter.”

The solution? That came with an assist from former pro turned TV star David Feherty.

“You could have one ball for the pros and let the amateurs play with anything they want,” Watson said.

“Or you could play one ball in major amateur championships, as well as the professional tours. Yeah, we could do that. But I like Feherty's response to it. I was talking to David at the Masters. He said: ‘Just make the ball bigger. That will make up the difference in distance.’”

Watson is playing the Senior Open this week at St Andrews.

PGA Tour
£90 million English golf club DEVASTATED by huge fire
The Masters
Tom Watson joins Nicklaus and Player at The Masters as honorary starter
PGA Tour
Tiger or Jack with a PUTT FOR THE WIN? Was Tom Watson's response ever in doubt?!
PGA Tour
Tom Watson on Patrick Reed: "Did I say I liked him?!"
PGA Tour
Tiger Woods: his 7 biggest PUBLIC ENEMIES on the PGA Tour