Jack Nicklaus: Tiger Woods will "SLAP IT AROUND" again 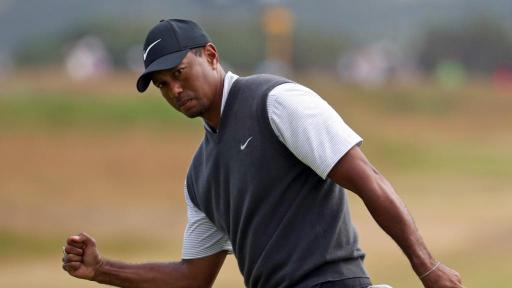 It's the question we seemingly ask ourselves every few years when Tiger Woods has an injury.

Will he ever play again, will he be the same, how many times will he play - is this truly the end?

His latest injury does look a nasty one, after the 43-year-old overturned his car after reportedly speeding on his way to an event on 23 February.

Of course @TigerWoods nailed the Happy Gilmore swing on the first try.

But Jack Nicklaus believes Woods will play again, and told the Washington Post he expects him to be able to "slap it around".

The record 18-time major champion told the paper: "I know Tiger. What he did at Torrey Pines [winning the 2008 U.S. Open] on a broken leg, what does that tell you? He’ll still be able to slap it around, and if he can putt, he’ll be all right.

"I don’t know if he can reach his old level, but I do expect him to play again."

RELATED: BRYSON HAS NO ISSUE WITH BROOKS KOEPKA

Woods has posted glimpses into his recovery on his social media channels after the crash, where he is said to have been driving at more than twice the 45mph limit before he had to extricated from his vehicle.

Woods has posted an image of himself alongside his dog and rehab partner, saying that the development of his course is going quicker than his recovery with the caption: 'Man's best friend.'

In May, he told Golf Digest his recovery was one of his most painful experiences due his previous injuries.

He told them he suffered open fractures in his tibia and fibula, injuries to his foot and ankle, and trauma to the muscle and soft tissue of the leg.

A crash report, released with Woods' consent, later revealed he was knocked unconscious and suffered a laceration to the front of his jaw and bruised his ribcage along with fracturing his right tibia and fibula.

He has been spotted in public on crutches and was most recently seen bearing weight on his right foot for the first time.

Woods will not be at the Ryder Cup as a vice-captain as he continues his rehabiliation.