Polara Golf balls will get your slice or hook back in the fairway... 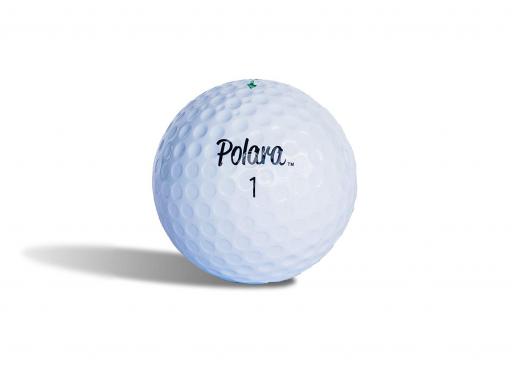 A golf ball company called Polara Golf has developed advanced technology that enables a golf ball to travel much straighter on slices and hooks - but as you might expect, it's not legal for tournament play.

These new Polara Golf balls have been designed with shallow and deep dimples to lower lift and reduce drag while enhancing weight distribution.

Its unique 2-piece construction consists of a central core and an outer cover.

All golfers have to do is point the arrow on the golf ball directly at the target. So if you're in the rough or fairway, line the ball at the hole. If you're on the tee, line it up with the fairway.

"Our 'Straight Self Correcting' golf balls fly so straight because they exhibit less aerodynamic lift than other golf balls," says Polara Golf.

According to the company, if you slice your golf ball 100 feet, you will slice your ball about 25 feet with this golf ball.

That could leave you in the fairway or first cut of rough, instead of the deep rough, bunkers or trees.

These golf balls are only for use during practice or when out playing with your pals.

You will not be allowed to use these golf balls during tournament play.

The Polara golf ball history dates back to the early 1970s.

Two scientists, Daniel Nepela and Fred Holmstrom developed the original Polara golf ball.  The Polara’s dimple pattern was unique, having six rows of normal dimples on its equator, but very shallow dimples elsewhere. The asymmetrical dimple pattern was a breakthrough in aerodynamic design that helped the ball self-adjust its spin-axis during the flight and thus enabled  the ball to correct slices and hooks in flight.

The Polara golf ball was first produced in 1975 by PGA/Victor, with sales starting in 1977. Because the Polara actually worked it posted strong sales in its first year. However, after extensive testing, the USGA concluded that the Polara golf ball did correct hooks and slices and thus refused to approve the ball for tournament play, ruling that it would "reduce the skill required to play golf." In 1978, the manufacturers sued the USGA on antitrust grounds.