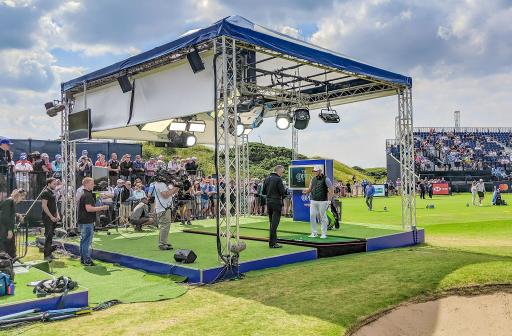 The adjustable Zen Green Stage completed a hat-trick of Open appearances last week, once again acting as the dynamic and exciting centrepiece for the Open Zone during Sky Sports Golf’s impressive TV coverage of the 148th Open Championship from Royal Portrush.

Its TV appearance in Northern Ireland last week meant that the Zen Green Stage was present at each of this year’s four Majors – in Augusta for The Masters, at Bethpage Black in New York for the PGA Championship, at Pebble Beach for the U.S Open, and at the Open Championship, each time as part of Sky Sports Golf’s presentation of the event.

At Royal Portrush, for the third year running the world’s leading golfers and coaches used the Green Stage’s adjustable slopes to put on Open Championship masterclasses for the watching TV audience.

Superstars such as Adam Scott and last year’s Open Champion Francesco Molinari also showed off their skills on the Green Stage, as did Ryan Fox, Branden Grace and Dame Laura Davies and numerous others who took part in Sky Sports’ entertaining 148-Yard Challenge.

Tour coaches Pete Cowen and Graham Walker also presented from the Zen Green Stage, with the latter talking about how he helps last week’s runner-up Tommy Fleetwood with his short game on Tour.

“The team at Sky Sports is incredibly receptive to new ideas, and it is a privilege to have such a profound relationship with Europe’s leading sports broadcaster” said Zen Green Stage founder, Nick Middleton. “Being able to put superstars onto real-world slopes in the live Open Zone environment creates brilliant flexibility when planning a TV feature, especially with instruction in mind.

“Sky Sports continue to lead the broadcast revolution” he continued. “Innovations such as last week’s debut of Sky Scope are just the latest example of how Sky Sports is showing the world how to present golf in an accessible, entertaining and authentic way.”