Callum Shinkwin beat Kalle Samooja in a play-off to win the Cyrpus Open. 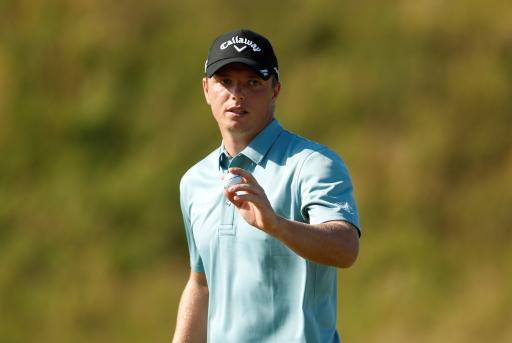 Callum Shinkwin claimed his maiden European Tour title in dramatic style after he beat Kalle Samooja in a play-off at Aphrodite Hills to win the Cyprus Open.

After his tee shot found the rough down the par-5 last, Shinkwin managed to get on the green in two and then roll in a 54-foot putt for eagle to finish the tournament 20-under par. Watch the incredible putt in the video below:

Callum Shinkwin sets the clubhouse lead at 20 under with an eagle on the 18th. #CyprusOpen pic.twitter.com/q9QBI9y2aa

Overnight co-leader Jamie Donaldson finished in a tie for third alongside Scot Robert MacIntyre and South African Garrick Hugo, who all shot 18-under par, two shots off the lead, while Sami Valimaki finished one-stroke further back in a tie for sixth with Jason Scrivener and Dale Whitnell.

Shinkwin started the final round two shots behind the lead and made birdies at both of the par-5's on the front nine to reach the turn 2-under.

The Englishman was two-shots behind Samooja with two holes to play, when a birdie at the par-3 17th and an incredible eagle at the last suddenly put Shinkwin in the lead.

Samooja couldn't match Shinkwin's eagle to win the tournament, but he tapped in his birdie putt to extend the Cyprus Open to a play-off.

The players went back down the 18th hole, where Shinkwin got up-and-down from the bunker for a birdie and Samooja missed a five-footer for a birdie of his own, handing a maiden victory to Shinkwin.

"It's something I've always wanted to do and now I have," Shinkwin said about his first European Tour win. "It's been a bit of a shock but it feels great."